Unless you’d like to give me your portion of the cheese board, in which case we will get along JUST FINE!

Know who your friends are (mine are different types of cheeses).

I’ll eat this block on manchego by myself bro WATCH ME. 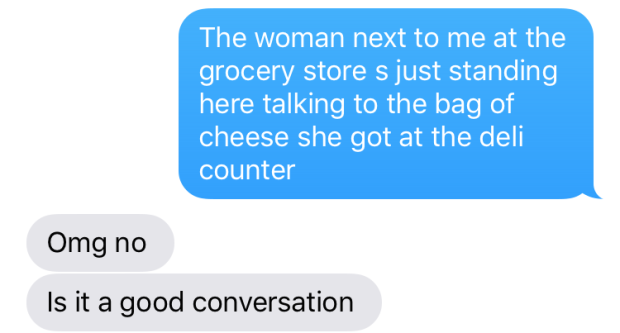 Honestly they got a lot of shit worked out.

No, seriously. This is how I picture heaven in my mind.

For more tips, buy my audiobook!* 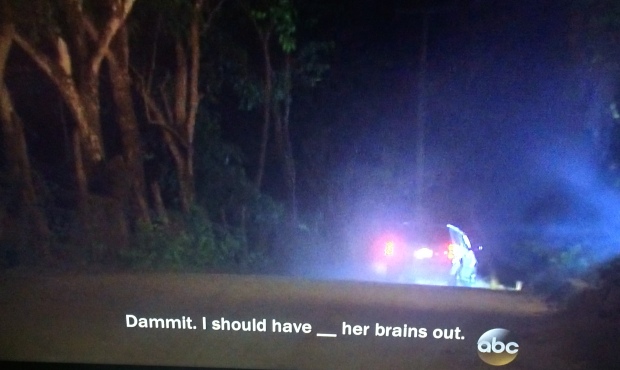 I’m going to be straight up with you guys, I have no idea how Bachelor in Paradise ends. Does one couple win? Are there prizes? Or do people keep leaving and arriving forever into eternity and Carly and Kirk just live in Mexico now?

Anyway Joe is still a salty wuss about Samantha. He doesn’t really know what’s going on, which is how I feel in most open bar situations.

We’re six minutes in and Sam’s been called a “master manipulator” twice. She cancels her date with Justin because she still likes Joe, she just DOESN’T DO DRAMA. Really guys, I can’t stress it enough. Sam keeps saying, “I have never had drama in my entire life” which I’m calling bullshit on because anyone who has acrylic nails has dealt with drama. Acrylic nails and drama go (paraffin) hand in (paraffin) hand.

Annnnnd now Chris Krakowski is here. (I just Googled him and apparently I am wrong, Chris BUKOWSKI is here.) The only thing I know about Chris is that he randomly showed up on Andi’s season and she was like eh, no thanks. He is the Clare of Bachelor men and has been on every show in existence.

Chris is good at “making things go fast” with women, so that’s neat. He immediately orders a vodka soda, which means he is a CLUB GUY and is ready to TURN UP. Can’t wait.

Amber is going on Justin’s date instead of Sam but only to make Dan jealous. Still with me? They salsa dance and it’s kind of cute until Amber takes his shirt off and JUSTIN IS SO FUCKING SUNBURNT. This is 2015, Justin. Act like ya been there before.

I am 100% sure he is thinking, “Ow, ow, please don’t touch my shoulders- AH! Oh my God. Pretend this is fun. Am I smiling? Don’t put your arms around my neck- OW.” They make out and now Amber is crying about Dan. (Pull it together, babe.)

Back on the beach Chris is saying insane things like, “Bachelor Pad was the best show that’s ever happened.” HA. Apparently you’ve never heard of Lizzie McGuire. Chris is drunk and falls into a fire.

Amber talks to Dan about their relationship and he uses the F word- friends. I’m standing by #1 BAD BITCH Ashley S. when she said Dan is a grandpa. The hottest grandpa I’ve ever seen in my life, but a grandpa nonetheless.

BUKOWSKI (Chris’ alter ego) asks Tenley on a date and she has to explain her No to him seven times. His comprehension skills are not shining. Chris decides he did what he came here to do (fall into a fire) and it’s time for him to leave. He listens to the voices in his head and walks off barefoot.

Meanwhile everyone is still OBSESSING over Samantha and how the ocean must be Samantha Water. (Samantha Water is something I should be trademarking, bottling, and distributing.)

Sam and Joe flirt on a beach bed and Sam is a pillow chameleon. She literally made her romper out of the same fabric as the pillows and I can’t even see her. What I can see, is an apple box in the top right corner of the screen. Little behind-the-scenes Hollywood Easter egg for ya.

At the cocktail party Ashley I. gives Jared a 10,000 page novel that is sure to be a must-read. Also Ashley I. is dressed EXACTLY LIKE JASMINE. I mean, exactly. And don’t you dare say this wasn’t on purpose because it was. It was. 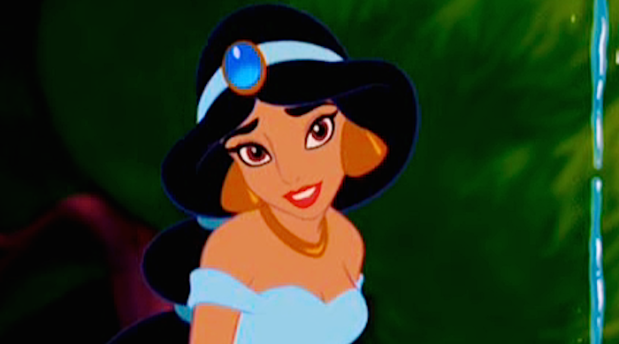 Here is where things get muy interesante. Amber says Jared was always her #2 choice, so she’s gonna offer him her rose. The problem is Jared might not make it to the rose ceremony because I doubt he will be done reading Ashley’s letter by then.

Back in Samanthaland, Dan thinks Joe wants to “pee on Samantha like a fire hydrant.” Super visual, Dan. Everything about Samantha annoys me at this point except her adorable For Love and Lemons crop set. You win there, girl. I’ll give you that.

Ashley I. fucks Amber over and gives her rose to Jared. Jared kind of half smiles but through his teeth is going, “Greeeat” in that way where you know it is NOT great. Ashley I. doesn’t care and is thrilled. 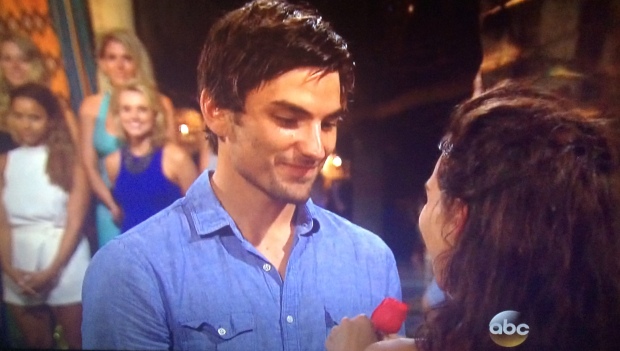 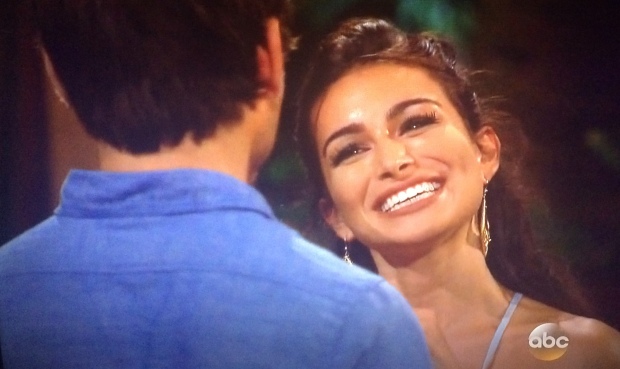 Sam has the final rose and she keeps talking about how she hates drama. Does she think there are completely new viewers to this show every week? We KNOW you hate drama. It’s the only thing you’ve literally ever said. She PICKS DAN, and #1 BAD BITCH Ashley S. immediately says exactly what we’re all thinking which is, “Shocker!” I am laughing out loud at her. Amazing.

Joe is kicked off but he will NOT leave without showing that one god damn text from Samantha. He cannot let go of the fact that she said, “do whatever it takes to get a rose.” What she probably meant was, “Yes! Please try to stay so we can meet. Do whatever it takes ;)” which does not mean “lie and manipulate a widowed single mother so we can get married.”

In the Sad Limo Joe finally pulls up the text, somehow thinking he is going to be vindicated. Also who has 14 unread text messages? You’re a crazy person. 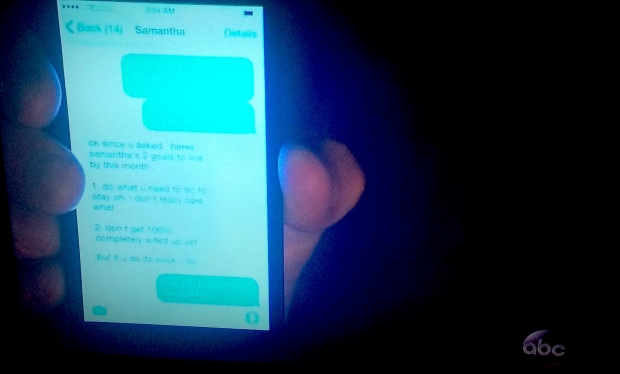 As the car drives away Joe says that he, “Should have fucked her brains out,” which is hilarious because “should have” implies that he had the option. Pret-ty sure that was never offered to you, buddy. Let’s be clear.

Tanner has now called Sam a chess player, a juggler, a praying mantis, and a puppet master. Jesus Christ, Tanner. Cool it with the analogies. You can just call her a lying bitch and we’d all get the picture. On the opposite end of the spectrum Jared only knows one phrase. He has said, “fall on the sword” a hundred times this season. This isn’t Game of Thrones. Nobody is falling on swords so shut the fuck up about the swords.

The way #1 BAD BITCH Ashley S. sees it, Sam wasn’t “born out of a flower, or a seashell” but is Aphrodite, and now Sam is “like a dead bird to her.” YES. Those words couldn’t be more confusing or magical and I just FUCKING LOVE HER.

Samantha cries, AGAIN SAYING SHE HATES DRAMA, and Dan comforts her. Except why does Dan have a tissue on him?? That is so weird. She goes, “Can you get me a tissue?” And he just already has one. Having a tissue in your pocket is proof positive that you truly are a grandpa. #1 BAD BITCH Ashley S. and I rest our case. (We would make an amazing lawyer team on a TV show so let’s hear some offers!)

Chelsie shows up (ANOTHER girl with a weird fucking spelling!!) which is not that exciting but I’ll let her prove me wrong. Also Jared is still reading Ashley I.’s letter as the credits roll.

According to the “Sneak Pee-k” of tonight’s episode on the Bachelor website, Juelia gets stung by a jellyfish and needs someone to pee on her. Too bad Joe isn’t here anymore, I hear he pees on bitches like fire hydrants!

Check out more of my Bachelor recaps here.

If I know one thing in this world it’s that Ashley can melt the fuck outta some cheese.