Before I can get to the real nitty gritty of tonight’s dry shampoo-fueled circus, let me start by giving a round of applause to BIP bartender/Sarah Hyland’s boyfriend Wells Adams for appearing in the Puppy Bowl yesterday. (I’m sure you ALL knew that already, since you of COURSE watch the Puppy Bowl every year.)

EH-KNEE-WAY, they’re in Paris and Arie may or may not have a hickey on his Adam’s apple. Well, his Arie’s apple.

Lauren B. (can we just call her Lauren now? She’s the only one left) gets the first one on one date, and although Arie doesn’t know her that well he’s still having a great time since she’s so fucking hot. But the thing is they’re like, straight up not talking. They spend an entire day roaming the streets of Paris and she’s just like, “Yeah, that’s cool” and that’s about all that happens.

She’s even silent at their dinner, despite being in my ideal dining situation.

I mean, that’s a place that looks like it’s got a decent Bolognese, amiright? But then Arie opens up to her, and explains that his ex-girlfriend got pregnant with their child, but then while he was away on some sort of very important racing business (not a thing) she miscarried and left him. First of all, wow. Second of all, now he has to give Lauren the rose for not just replying to that story with, “Well, shit.”

For the big ol’ group date they go to Moulin Rouge (tourist trap, do not go), where the girls have to learn weird dances in thongs while holding up no fewer than 50lbs of rhinestones. 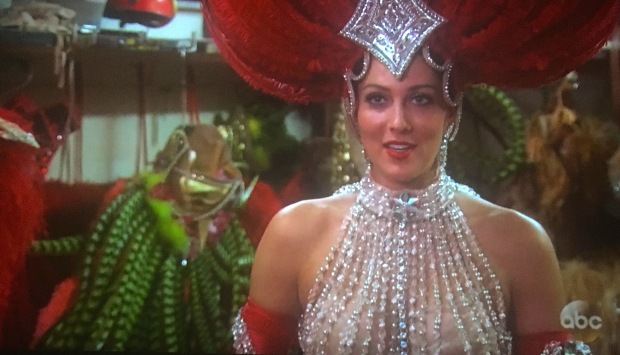 I’m uncomfortable. But nothing makes me more uncomfortable than the choker Bekah M. is wearing at the cocktail party later. 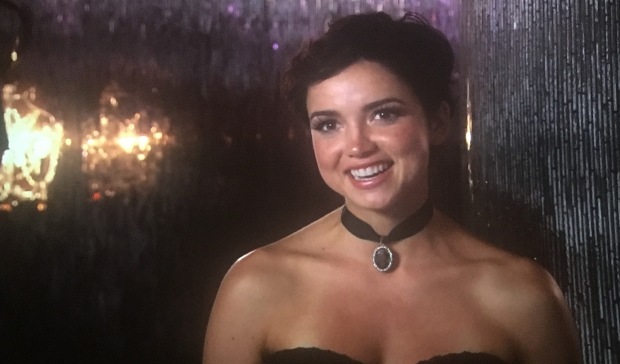 I absolutely CAN NOT. I’m horrified. Like I’m sorry, but no. That’s a no. And YET, she gets the group date rose, which seems to realllllly piss off the other girls. 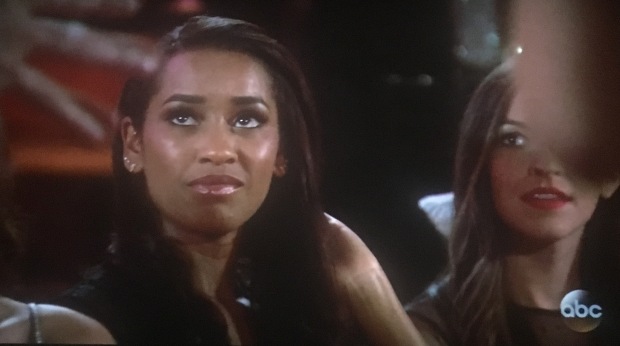 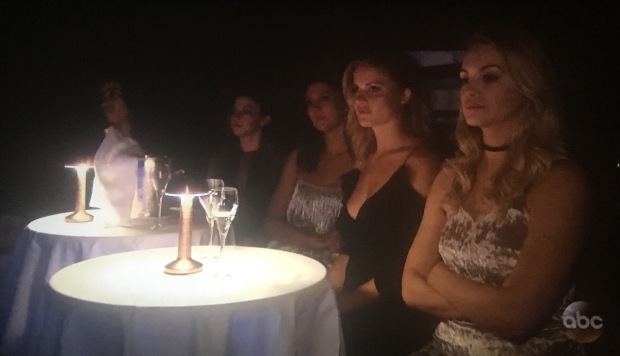 Because she gets to put on another cringe-y costume and dance with Arie in a real show that night, where Arie literally LIP SYNCS to French music.

This is the most awkward and terrible group date ever, and I would rather be on a 2 on 1 date with psycho Krystal than have to watch Arie mouth the words to a song he doesn’t fucking know.

Speaking of Krystal and the 2 on 1, she’s paired with Kendall, love of my life. I really can’t get over how beautiful that girl is! So they go on this date, and I’m pretty sure Krystal at one point says she’s “farm life material”??? I mean I’m sure she said “wife” in there somewhere but I think she also said farm.

She talks to Arie about her bowling alley boozfest freakout, but then also talks about Kendall and how she’s probably not ready for marriage. Um, whoa bitch, not cool.

Of course Arie immediately rolls on her and tells Kendall what she said, so Kendall goes up to Krystal and instead of ripping her a fucking NEW ONE like I would have done, she just sits super close to her and is like, “I empathize with you, Krystal. I get it. You’ve had a hard life.”

At this point Krystal wants to gouge Kendall’s eyes out with a bobby pin, but thankfully she doesn’t.

Oh also? Arie can’t decide between them, so they need to go to dinner together too. Great, grand, WONDERFUL. At dinner, their view is pure shit.

Right? Ew. Krystal doesn’t want Kendall’s fucking life advice, and just wants to sip her wine and make weird cooing noises to herself and you know what? That’s exactly what she does. Until of course, Arie sends her ass home.

Yeah, he can’t do it anymore, ya know? She is SHOOK, especially because Arie doesn’t even HUG HER GOODBYE. He and Kendall literally just stand up from the table and are like bye!! and leave her sitting there. It’s savage as fuck. 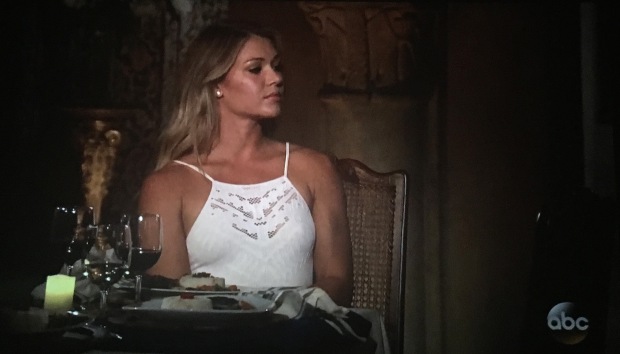 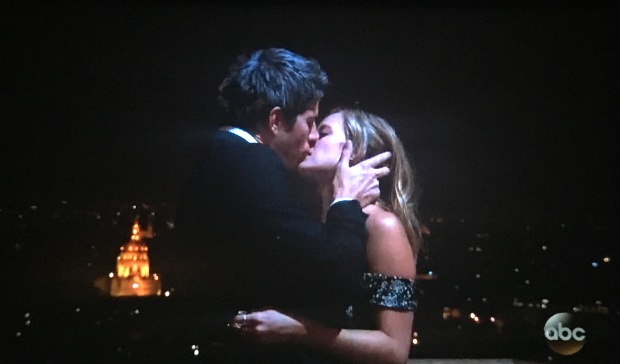 Meanwhile everyone back at the hotel (Is the hotel a boat?? What’s happening?) celebrate Krystal’s demise with some bubblayyyy! 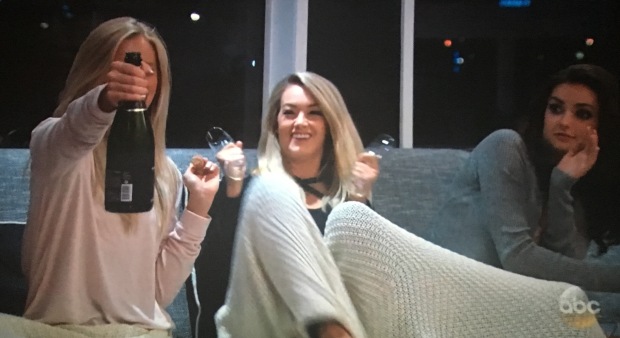 Jacqueline gets the final one on one date (there are 856 dates this week) and I’m positive she’s going home. Their car breaks down, they shop, and Jacqueline can’t walk in her new shoes. 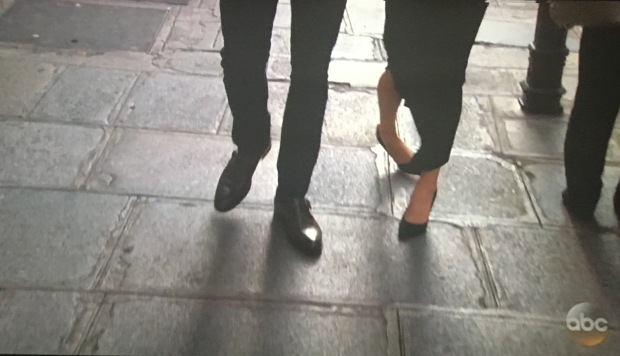 I mean, girl. We are witnessing a straight up sprain right now.

But she likes him, and she just wants to be with him if that’s okay? But now she’s crying?

Like I swear to you I have no idea what’s going on in this conversation and I can’t tell if she’s about to leave him or he’s about to dump her, but then he gives her the rose and she accepts and I just give up on understanding this show. Either way she has six years of a graduate degree to complete, and Arie ain’t going to stick around for it. This much I know.

What I also know, is that the rose ceremony is in a very scary place with mannequins. 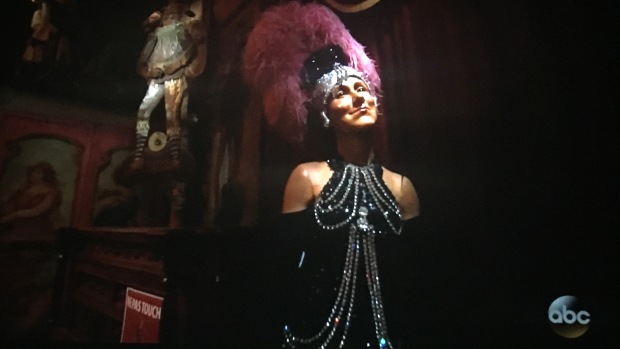 I don’t like it at all. But FOUR betches already have roses, so there are only three to give out, and like clockwork we say goodbye to Jenna and Chelsea. 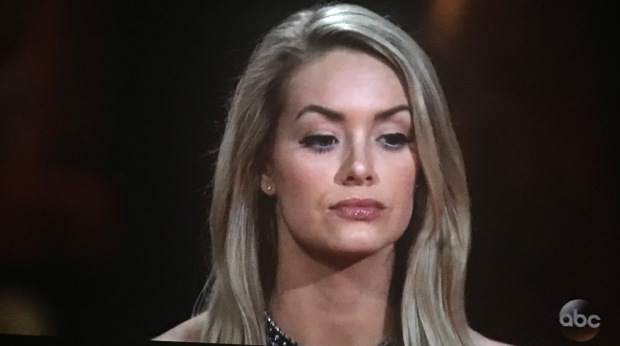 Chelsea is super sad about it, and I would be too once I realize that the remaining women are going to Tuscany next week. They don’t call me Sam “Prosciutto” Jarvis for nothing, okay? They don’t also call me Sam “Cheese Plate” Jarvis for nothing, ya know? I didn’t spend all of middle school known as Sam “Pappardelle” Jarvis just for shits, you got me?

Read last week’s recap here, or other ones here.

One thought on “The Bachelor recap: “Krystal Lives In A Delusion””