Brosefs, I get it. This shit is a day late. But aren’t you like, happy to know that I have a real life outside of this and other work obligations? As you’re sitting there refreshing whoissamjarvis.com I bet you’re thinking to yourself, “Wow, I really wish the new recap was up right now, but I’m so proud of Sam for being busy with her other hilarious comedy projects, coming our way in 2018”??? No? K.

When we last left these chicks, Bibiana was still super madsies at Krystal and I’m here to tell you not much has changed in one week. But Chris Harrison shows up to the house to talk about the first group date, and it appears he’s taking a page out of a fictional book I just made up called Mr. Casual: Fashion For The Everyday Man.

He tells the women they’ll need a lot of STRENGTH for this date and I would already be out. Nah, no thanks, I’ll have a mimosa by the pool then try to sneak in a quick convo with Arie at the next cocktail party like, five days from now. Anyway they need strength, and I’m not going to list the betches going on this date ‘cause it’s like 9 of them so who cares.

They meet with two old ass women who are former GLOW wrestlers, and one of them attempts to “scare” Bibiana by being a bitch and asking if her mom knew how to spell when she named her. 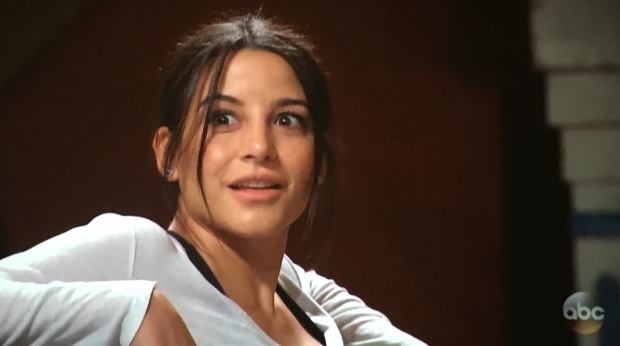 UM, WOW. I’m INCREDIBLY uncomfortable right now, and I’m pretty sure when that moment happened in real time, producers were like GOD DAMMIT, you fucking idiot. Racism is just not a good look, lady. No wonder you’re not famous anymore. (Boom, roasted.)

The girls get dressed up to wrestle, and I’d personally hope to get the plastic lunch tray. 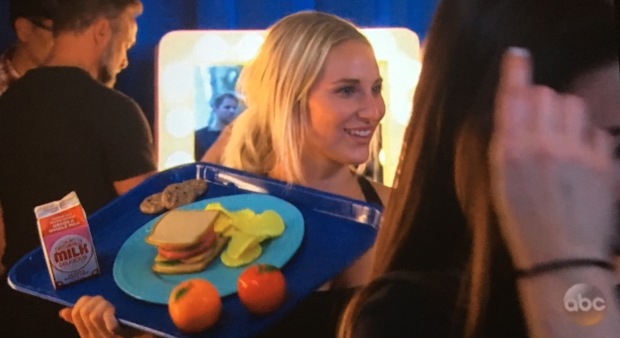 It goes to Maquel, who is playing a Lunch Lady and I’ve maybe never been more jealous of a person in costume? It’s great. I’m going as a lunch lady for Halloween next year.

Everyone wrestles, it’s boring, Kenny King from Rachel’s season shows up for some reason, and then finally this nightmare of a snoozefest ends and it’s on to the date’s cocktail party, which appears to be hosted in a Pier 1 Imports.

At the cocktail party, Arie makes out with everyone. 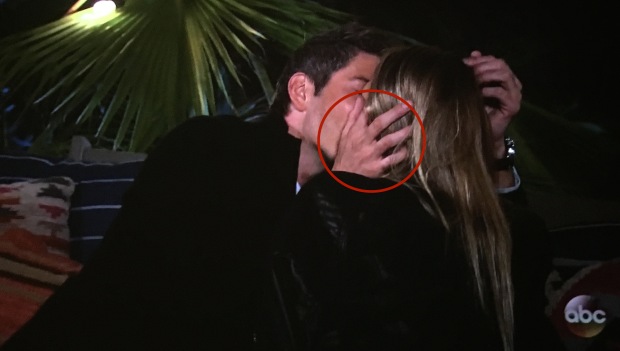 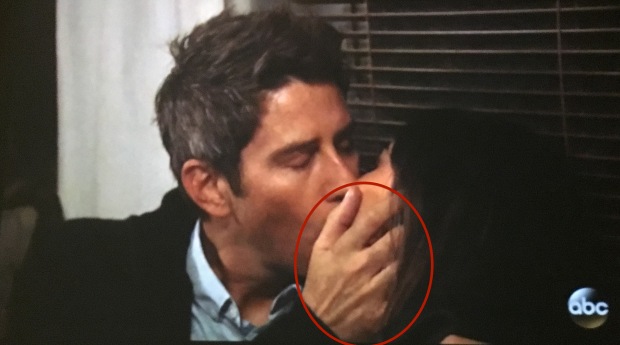 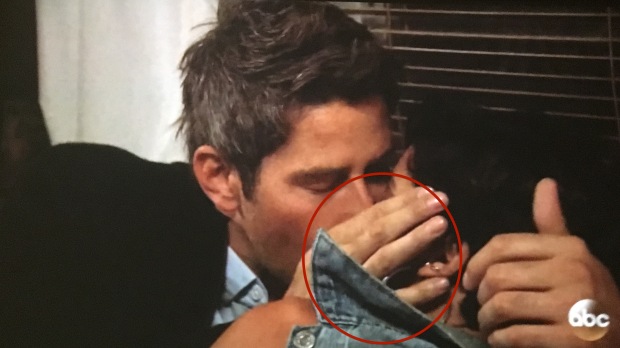 I am REALLY going to need him to start sitting on his hands or something. I can’t just comically circle them for the next 10 weeks, can I?! Jesus Christ.

Bibiana decides she’s going to tell Arie that Krystal is stealing people’s time with him and being an all around b-hole, and I’ll tell ya what, Bibs, that’s a one way ticket to Crying In A Vanville. Snitches get stiches, and more specifically on this show snitches get sent home immediately. She’s on borrowed time now.

Bekah M. gets the group date rose instead of Chelsea, because Bekah is fake as shit and is trying super hard to be quirky and carefree and the total opposite of all these other basic betches, ya know?

Smokin’ hot Lauren S. gets the one on one date, and I’m excited because she looks exactly like Sienna Miller, and I’m always excited to see Sienna Miller.

While they fly up to Napa, the rest of the girls are just hangin, and Krystal tells Marikh a highly dramatic tale of how this guy dumped her best friend in 8th grade to date her, but she told him she wouldn’t date him because he had just broken up with her best friend. ….the fuck?? Marikh agrees with me.

I’m sorry, but are we talking about your relationship history from 8TH GRADE?? You don’t hear me talking about how Eric bought me a dozen roses and gave them to me in the cafeteria and asked me to the 8th grade dance. (Welp, I guess now I’m talking about it.)

In Napa, Lauren is…. talking a LOT. Seemingly about nothing. I don’t want to just pass her off as stupid, but she’s coming off as pretty fucking stupid right now and I hope that’s just mean editing on ABC’s part. 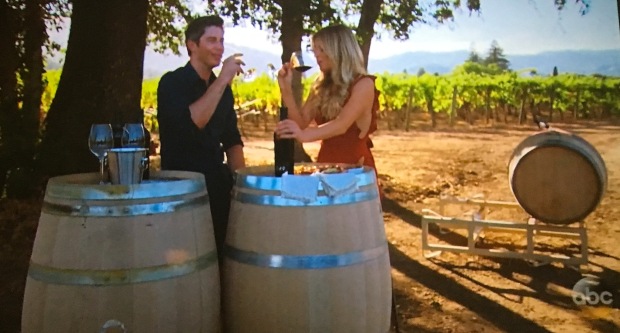 But I had decided as soon as she left for the date that my gorgeous Sienna impersonator was going home tonight, because they showed a clip of her zipping up her luggage at the mansion and they never just show that RANDOMLY, unless they need to remind you that if she goes home some PA will come into the mansion, say NOTHING, and take the bag.

So ya, Lauren S. shits the bed. At dinner she babbles about all kinds of weird shit like her mom’s eye infection, and I am really feeling for her in this moment because she KNOWS she’s being a crazy person and just can’t stop herself. Sort of like when I decided to make all my friends in college homemade snow globes out of mason jars and spent like $200 at Michael’s buying supplies. You KNOW you’re being a crazy person but it’s just all happening so fast! (For all my friends reading this who did NOT receive a homemade snow globe in college, please know that I never made any of them and just last week finally threw out a shit ton of glitter and stickers and weird little scenes that I was going to put in them. I’m sorry. I failed you.)

Lauren’s out, okay? She’s gone. He can’t give her the rose. And when the above-mentioned PA silently grabs her bag from the mansion, the girls FREAK OUT.

On the second group date, the girls are going to play with dogs and THAT, my friends, is what I call an A+ date. Except Annaliese is crying, and I’m now clutching my friend Jordan on the couch while we both scream, “DID SHE HAVE A TRAUMATIC DOG INCIDENT??” 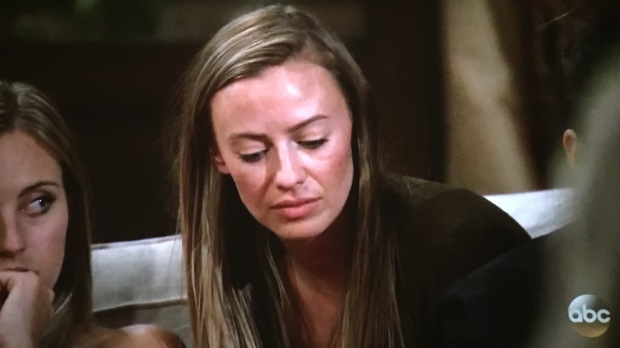 Because like, you’re not allowed to have a traumatic bumper car incident and a traumatic dog incident. That’s too crazy. Also, I feel like these producers were just cackling to themselves as they reviewed her application to come on this show, where they’d highlighted a section that I assume says LIST YOUR TRAUMATIC INCIDENTS.

Anyway yeah so bitch almost lost her eye to a dog? Fine, you’re allowed to be afraid of dogs. But I don’t need the dramatic monochromatic dramatization of the event, ABC.

Do. Not. Need. So anyway they’re going to play with dogs on this group date, one of which is Arie’s dog who I think is named Fashion? It might be Bastian, but I’m going to continue to tell myself that Arie’s dog’s name is Fashion because it makes me happy and sometimes it’s the little things in life, ya know?

The girls have to do a dog show at The Grove (anxiety-inducing tourist trap of a mall here in LA), and thank god Fred Willard is there.

But they do this show, and everyone is terrible at it and it’s boring as shit, except for Brittany, who has somehow gotten the role of “prop”?? Like literally she’s a tree and then a lamp and then a fire hydrant. 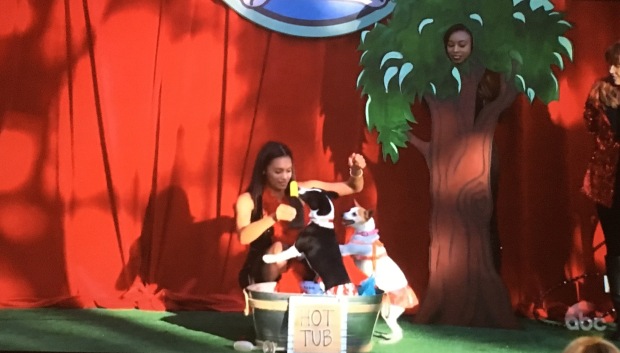 That night at the pre-rose cocktail party, Arie still is just making out with everyone and he just does not know what to do with BOTH hands!!

Is that a race car driver thing? What’s happening?

Bibiana has set up a romantic cabana for them to talk in, which she says is private even though it’s literally a giant bed in the middle of the god damn driveway. Turns out it was NOT private, and Arie takes literally every girl to it to make out except for her.

I’m just dying at this point. The sneaky ass hoes producing this show are really just hilarious to me. I’m POSITIVE they were like, “Hey, there’s a romantic bed out front, take him to it,” to every single one of the girls. Stirring the pot, and stirrin’ it good. Fucking savage.

Arie then drinks moonshine with Tia, and I feel like it’s pretty strong.

Various traumas aside, things have been real awkward for Annaliese lately, so she asks to kiss Arie in an attempt to speed things up. But Arie is like sorry bro, nah. 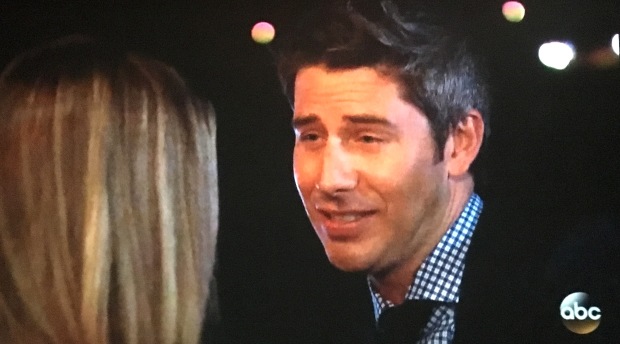 Basically she realizes pretty quickly that a) he’s not into her and b) if she stays on this show they will force her to relive every single horrifying event of her life, so she should probably go home. 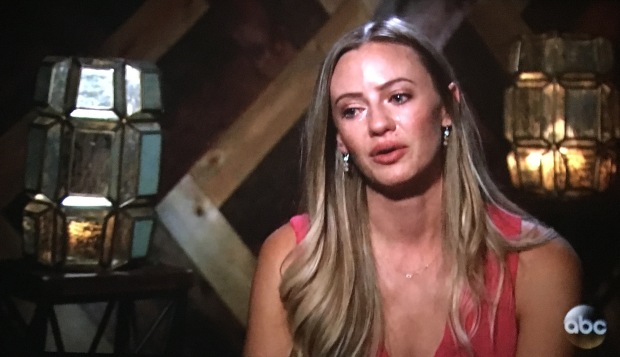 By the time they’re ready for the rose ceremony, I realize that Bibiana has not even TALKED to him tonight. Like, set up this cabana and then just never talked to him. So it should come as a shock to absolutely no one that she goes home. What did I tell you?? Snitches get stitches, slash get sent home immediately.

Next week, the babies are goin’ to Tahoe. Don’t forget your booties ’cause it’s cooooold out there!