I can’t tell you how absolutely TICKLED I am that The Bachelorette has started and my girl Rachel is getting her moment, so let us begin. Since we last saw her, Rachel’s been living in Dallas as an attorney, as evidenced by the fake footage of a trial where they literally make her say, “Objection!” into camera. 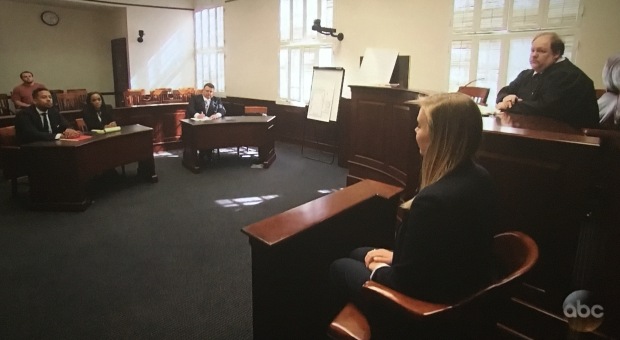 We are all that judge.

But now she’s gotta fly to LA and hold it right there, is that a DOG? I’m sorry, but if you think you can slip in a dog on a plane and I’m not going to notice, you are motherfucking wrong, okay?

Turns out this is Rachel’s dog Copper and he has a freaking LEG CAST, which is the most adorable thing I’ve ever seen and if I find out it’s because one of the crew guys stepped on his leg I’m going to burn my apartment to the god damn ground. (“But that would only hurt you, not them.” -philosophers)

But it’s time to learn about our suitors, so we meet a wrestler who has a daughter, and also this guy who talks on a phone with a chord that isn’t coiled up. 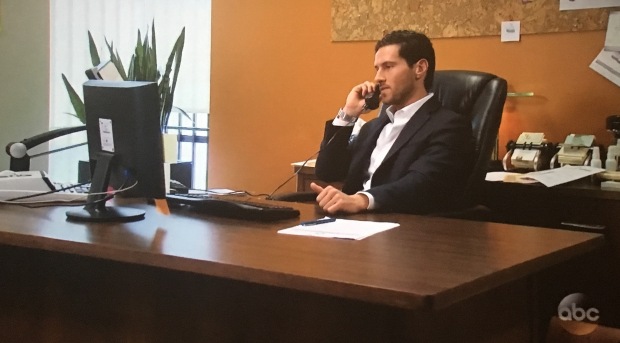 The line just goes straight into the phone. Completely psychotic. Do his business cards say Patrick Bateman, by any chance? Highly sus.

Also someone ELSE has a dog and I am just loving how many dogs are already in the first seven minutes of this program. 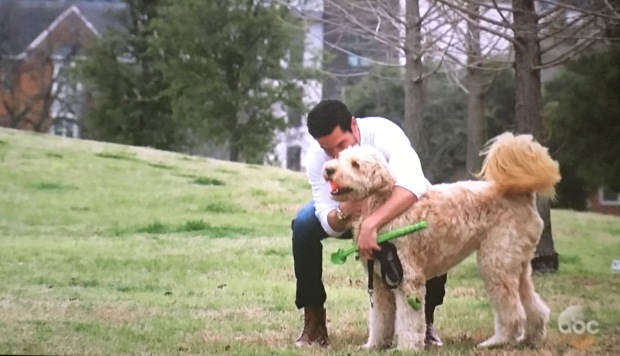 This furry friend belongs to Alex, who I’m hoping exercises with inflatable dumb bells because if you tell me these comically large things are actual weights I’m going to choke to death on the pickle I’m inhaling (I’m on a diet and it is so, so sad).

Look at those things! Ridiculous.

Up next is a guy who is shaking so violently that I’m pretty sure he’s having a seizure, and since I can’t see his face that clearly I’m also 100% positive he’s Kevin Bacon.

Wait ’til Kyra Sedgwick sees you on this show screaming about WHABOOMs, buddy! You’re toast!

Anyway, wanna know what a sex addict looks like? 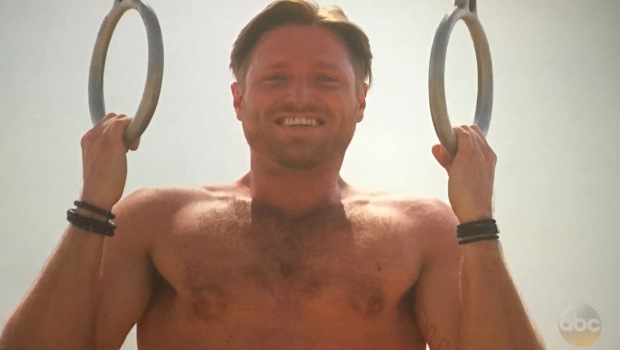 We also meet Diggy from Chicago and Josiah, whose brother killed himself when Josiah was young. Both of these men are pret-ty fine, so I’m thinking they’re solid contenders compared to the rest of these jokesters.

But the time has come. Let’s ARRIVE! IN! SOME LIMOS! Smokeshow Peter gets out first, and girl likes what she sees.

The rest follow suit with the usual insanity that comes on the first night: an Urkle bit, a guitar, a marching band. Total chaos. But inside, one of the brosefs says that Rachel is beautiful AND smart and that combination is, “really rare” in a woman. Um, excuse me, fuck face? Rude. It’s a “really rare” combination in men too, which makes at least 24 of the guys in that room dumb as fucking rocks and I’m gonna go out on a limb and say you’re included in that list, MALE MODEL.

Now Rachel meets Fred, and at first I think there is a real love connection here because he’s hot and she is giving him the eye.

HOWEVER, he goes on to explain that they went to the same school when she was in 8th grade and he was in 3rd, so he’s excited to see her because they haven’t talked in over 15 years. I don’t really know what’s going on here, but she seems shook as hell so I can’t wait to find out more.

Suddenly a man named Adam comes out of the limo holding a tiny doll appropriately named Adam Jr. and I’m scared, Rachel’s scared, everyone across America is scared.

Here is Diggy’s reaction to Adam and Adam Jr. walking into the mansion:

Next is a guy in a penguin suit, followed immediately by WHABOOOOM! Yes, he actually does his seizure thing in front of her and I just cannot stop laughing. CACKLING, as they say.

He does it inside for the men too, and apparently Diggy is straight up Jim Halpert now.

The rest of the sexy black men are also like dude, what the fuck?

But we’ve done it! We’ve met them all! Rachel comes in to welcome everyone and have them cheers to love or some shit, except all of their drinks are empty because they’ve been locked in this fake ass living room for the past five hours while a crew guy continuously rewets the pavement outside. Look at these empty cups, nothin’ but lime wedges:

Rachel talks first to Josiah, then to some kid who wants to build a sand castle with her because he loves the beach. It’s really stupid.

Meanwhile Adam Jr. is doing a spot on impression of me at any and all social events: 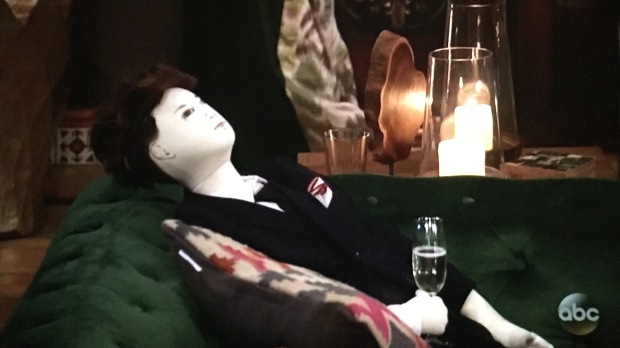 But then he starts getting sort of in everybody’s business? 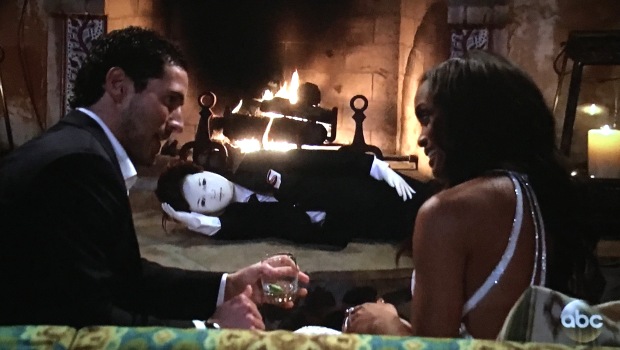 And now they are pretending that he’s TALKING IN FRENCH and I am no longer alive.

I can’t. I am simultaneously dead, and living for this shit. I bet whoever had this idea received an ABC gift basket shortly after the production meeting. Just a bunch of producers sitting in a room and somebody goes, “Should we get someone to speak French as if it’s him?” and the next day she has some wicker boat full of the finest god damn cantaloupes the west coast has ever seen. (I mean fuck, maybe that’s not how those meetings work, I don’t know!!)

ANYWAY so now Rachel talks to 37-year-old Colombian Bryan, who is definitely at the top of the pack. (I would like to point out that if a woman were 37 on this show, they would digitally remove her from every frame but YA KNOW, IT’S FINE. NEVERTHELESS SHE PERSISTED.)

So Bryan and Rachel kiss, and I can already tell it is not a kiss I would enjoy. Way too forceful, way too open mouthed. You JUST met this bitch, you think she wants your tongue actually down into her throat? 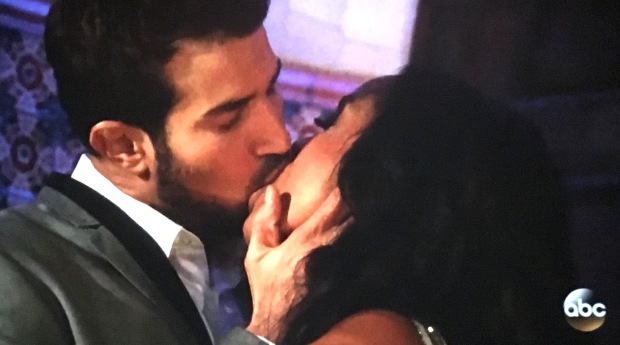 Meanwhile the rest of the guys trip balls about getting time with Rachel, so they stand awkwardly two feet away from her, lined up like she’s a fucking snow cone machine.

At this point Blake (possible sex addict/aspiring drummer) really doesn’t like ol’ Lucas WHAAAABOOOM and describes him by saying, “Lucas is the guy at family reunions who pinches your nipples.” You know, that guy. (Get a new family.)

And while one of the dudes is busy purring in her fucking face every five seconds (ew), Rachel has made up her mind that she wants to give the first impression rose to Bryan. Mohit sees them kissing afterwards and is like, NOOOO!!!!!!!!!! 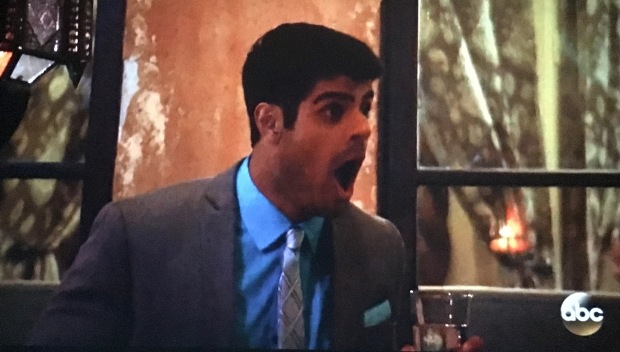 It’s time for the rose ceremony, and yummy Peter gets the first one, followed by Will, who dressed like Steve Urkle, and Jack, who looks like a comic book villain (and has an affinity for phones with uncoiled cords, I’m told).

This season looks like it’s going to be pretty much exactly like the others, so I am of course in. My two front runners are Peter and Kenny, and I’m going with Diggy as the next Bachelor.

Read the rest of my recaps here.

One thought on “The Bachelorette Premiere: “Whaboom, son!””

Y’all got Disney Plus?