When life gives you lemons, you’re supposed to make lemonade. When Jojo’s life gives her lemons she sort of just, eats the lemons?

We left off last week with four dudes standing in an airplane hanger like chumps while Jojo sobbed hysterically on the tarmac. Luke just told her he loves her and now the other boys are like WHAT is happening.

In the most dramatic rose ceremony of the season (© Chris Harrison) she keeps Aaron Rodgers’ brother, Robby, and Chase. Talk. About. A head scratcher. I know none of my friends were into Luke, but I felt like my weird attraction to his clichés and tall hair is what bonded Jojo and I together for eternity. 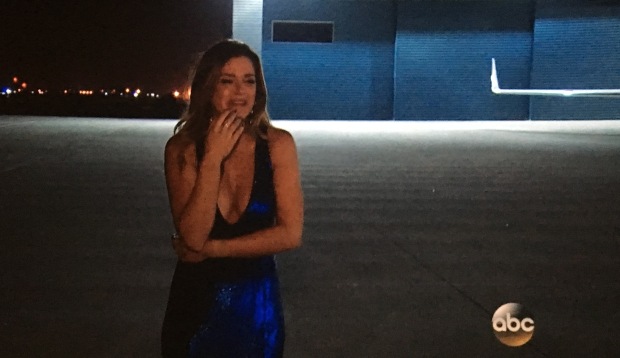 Girl is like, UPSET and it’s leading me to believe that the producers forced her to kick him off so that America will love him enough to make him the next Bachelor. I don’t usually believe in conspiracy theories, but this is exactly like that time everybody said we landed on the moon and we didn’t.

Luke is shocked. So shocked, that I worry some of his unresolved PTSD is going to come back and haunt his every thought. This is the face of someone who’s going to need to go BACK to therapy for this shit: 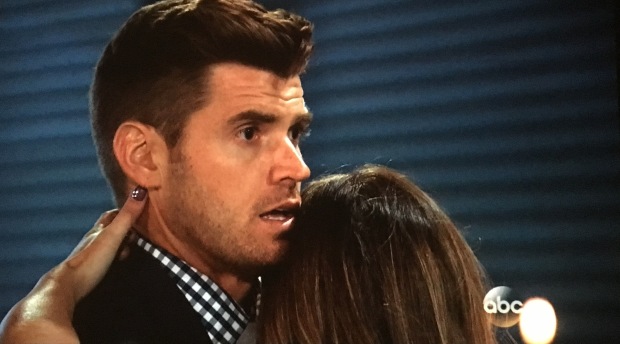 He’s like, WHAT?? Meanwhile Jojo is literally snotting all over the tarmac with her deep, heavy sobs. I want to be like babe, you didn’t have to send him home? OR DID YOU?! Dun dun DUNNNN. (“Get a grip, Sam.” –Me to myself, almost every day)

The final three go to Thailand for what Jojo calls the “exotic overnight dates.” Is she fucking high? They’re called Fantasy Suites. How do you forget the token phrase of The Bachelor franchise (besides, “He has all the qualities I’m looking for in a husband, but…”).

Robby’s date is up first and they meet in a marketplace where I guess it’s humid as balls. He immediately goes, “And you thought Florida was hot!” Well, well, well, look who’s suddenly a comedian! This is how pleased Robby is with his joke:

I half expect him to go, “…Right?! ‘Cause it’s hot there too! Jojo? Are you listening?” Truthfully I know he won’t say that, because he only calls her Joelle these days, which is juuuuust creepy enough for me to think he’s going to cut off locks of her hair in her sleep and keep them in a Ziplock bag under his pillow forever.

Speaking of hair, look at his fucking hair:

I know it’s in the EXACT same place as it is every single time I look at it but honestly my anger for it is growing at a frighteningly rapid pace. (However if he’d like to share his teasing techniques, hit me up.)

They get pedicures (I think they were just massages but in my mind he got a fresh coat of OPI’s Lincoln Park After Dark) and walk around this marketplace while is absolutely POURS. I mean, it is raining SO HARD and I want you all to realize how intense it is to lug god damn EXPENSIVE ASS CAMERAS around in a monsoon. I can’t begin to imagine how many huge plastic bags are duct taped around them.

That night Robby brings a note from his dad to prove once and for all that Jojo can trust him. I would prefer that he brought a doctor’s note, as that is the worldwide currency for, “You have to believe me” but you can’t win ’em all.

Then SHE gives HIM a note and it’s like guys, we are nowhere near a classroom right now, you don’t have pass notes back and forth! You can just talk to each other’s faces. Anyway Robby grins and goes, “I will gladly forego my individual room” which makes me laugh out loud but also makes me cringe. This guy knows what’s about to go down:

She then sits in front of the camera and tells the world she loves Robby. UM, SAY WHAT NOW? She loves Robby? Like, loves loves Robby? Did she see that last week he only buttoned the bottom button of his shirt? Should we tell her that in case she didn’t notice?? 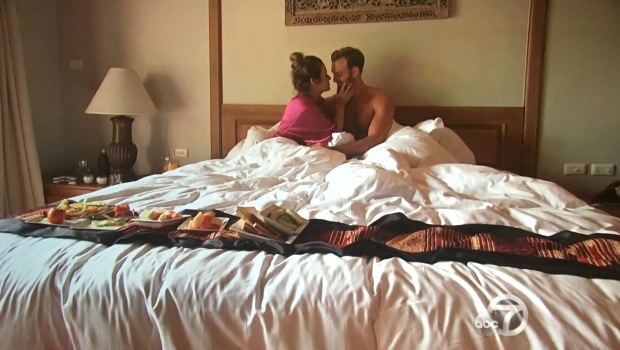 Jojo is thrilled and says, “It’s our first breakfast together!” It is very alarming because she’s still talking like she actually does love Robby.

Aaron Rodgers’ brother’s date is next, and they’re going on a hike! He has a huge backpack on that I assume is just for holding all of his expensive hair oils.

They get to a temple where they can’t kiss, and then sit on a rock and enjoy the beautiful vistas.

Get it? I said vistas because they’re starting at a fucking rock.

At dinner, she needs to get to the tough questions. She asks him what the future looks like and his response is, “That’s a tough question to answer,” which let me tell you is the WRONG answer. 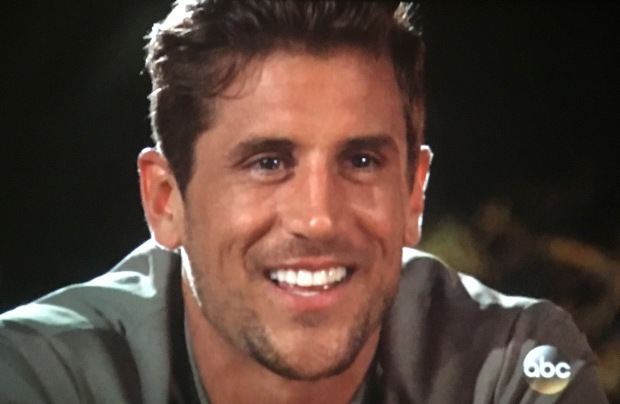 I can tell she’s starting to freak out because she goes, “That’s what Ben said!” and I immediately shout OOOH, GIRL!! I mean, damn, you’re bringin’ fucking B-Ball Higgins into this mess? She asks how he knows it’s forever and he lets out a big exhale, which I think translates to how hard do I have to work to get this fucking fantasy suite key?

Jojo loves him too, guys. She says so. Moments later, she patiently waits for the D.

The next morning she’s all giddy and says, “We’re eating our first breakfast together!” Bitch, you already said that. YESTERDAY MORNING. TO ROBBY. We get a final glimpse of their love with the obligatory walking-away-shot that producers of this show cream their pants over. 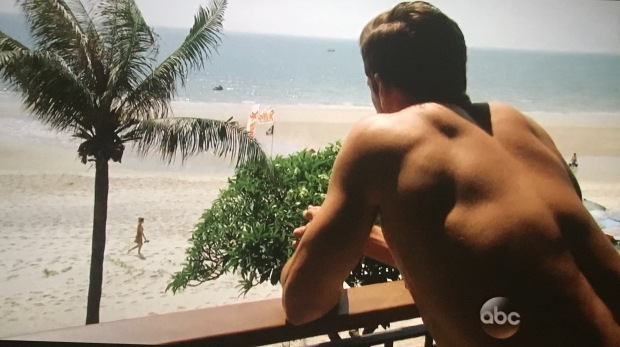 On Chase’s date, he kisses a fish.

Okay fine, they also have a beach day and it’s actually pretty romantic. Chase is opening up and although he is still pretty boring, there is vast improvement. He’s maybe even sexy and it’s like great, Chase. Way to really bring your A-game once she’s already fucked two other guys she’s in love with. That last ditch effort is what Aaron Rodgers’ brother would call a Hail Mary.

Before the evening part of their date, they keep showing Jojo and Chase in separate rooms staring into the distance so I know trouble is brewing. Sure enough, there is a knock on her door and fucking ROBBY shows up. Like, in the middle of her day with Chase.

Robby is a piece of shit. Who does that? I do NOT LIKE IT. He just wanted to say hi, because he is not man enough to just be confident. Aaron Rodgers’ brother may be a little douchey but you know what he’s not doing? Showing up to say hi.

I’m really worried about Chase. I have a soft spot in my heart for him after their fucking beach day, and I know it’s because this show has mind control serum in it and they’re toying with my emotions however they damn well please.

He is going to be so sad, so soon. But in Jojo’s defense, there is no amount of Xanax that could calm me from the panic of three men being in love with me at the same time. I’d be like, “WOW OKAY. I HAVE TO GO,” and would immediately pack my bags, move to Costa Rica and start going by the name Sofía.

In the fantasy suite he tells her he loves her and also tells her he’s never said I love you first. I am probably as sick to my stomach as Jojo is. Here is her face, which is all you need to know about how this night is going to go for him:

She needs to take a moment, so she sits outside and cries. I would sit out side and BARF. I would barf so much Thai food all over the place because this shit is looking stressful as FUCK right now. Here is Chase waiting for her to come back and smash his heart into one million pieces:

She comes back and says she didn’t feel how she wanted to feel when he said that, blah blah, and he is like, mad. He goes, “I get the point,” and stands up. Yes, Chase. Slay! Except then he goes, “So love means get the fuck out?” Eeee! This is some family divorce baggage rearing its ugly head. 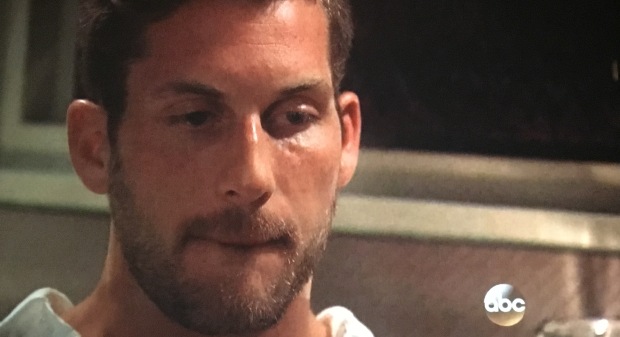 A lot happens in a small amount of time, but basically she keeps shouting his name and he tells the cameras that what just happened to him was the emotional equivalent of pulling your pants down and getting kicked in the nuts. Eloquence has never been his strong suit.

At the rose ceremony, which is now just Robby and Aaron Rodgers’ brother, it is slightly awkward. They notice he’s not there and they’re both kind of stoked on it.

But then, suddenly, CHASE WALKS DOWN THE STEPS. 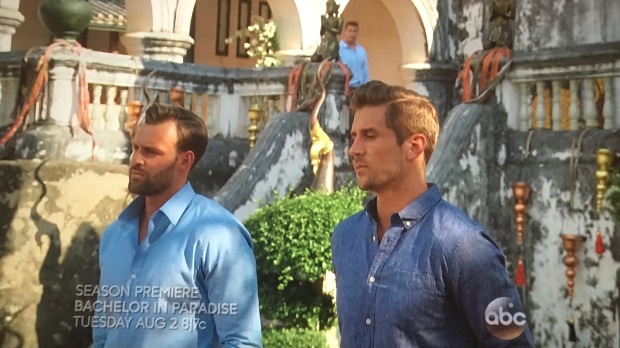 I thought his plane would be halfway over the Pacific by now. She goes to talk to him and the other boys are sweating, literally. 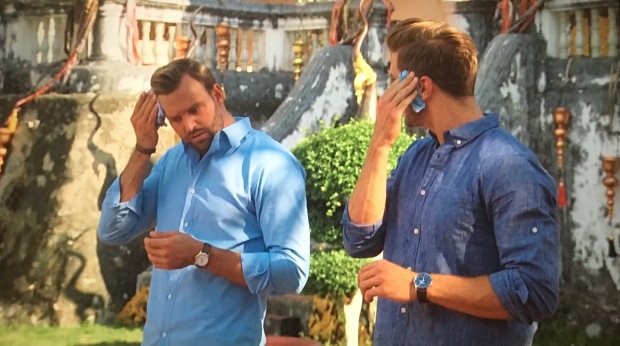 Chase says he’s proud of her, he’s impressed by her, he’s not mad. Let me just say if any guy I’ve ever broken up with came to me the NEXT DAY and said those things I would be like GREAT! That is fucking great. A real weight off my shoulders.

Robby and Aaron Rodgers’ brother obviously get the last two roses, and next week will meet her family. If anyone remembers Ben’s season, Jojo’s family was the one where the mom drank straight from a bottle and her brothers were huge assholes. I’m sure it’s all going to go VERY WELL.

More importantly the MEN TELL ALL is happening TONIGHT, and I can’t wait to see the whole gang! And yes, my little ducklings, I will be recapping it. This is my whole life now.

Now, who wore their dumb mode of transportation best?

3 thoughts on “The Bachelorette Recap: “Country Clubs and Coloring Books””