There’s been so much going on in the world lately that it’s important to gain some perspective and remember what really matters: grown men acting like little girls.

The Bachelorette’s Men Tell All kicks off with a producer yelling, “5, 4, 3, 2, 1…” as if this shit is live and everyone is scrambling around going, “Places, places!!” Spoiler alert, none of this is live. Nobody needs a countdown in their earpiece.

They of course open on Chad’s arrival, where he whistles like a sociopath while wearing an all black suit like he’s Johnny fucking Cash. They also give him a fictional movie trailer, which makes me actually laugh out loud because I know for a fact none of these dork noodles get trailers! MAYBE they get access to a craft services table. Maybe.

Chris Harrison gives us a sneak peak of Bachelor In Paradise, premiering next Tuesday on ABC.™ Here’s all you need to know about that:

Back in reality (where I am most comfortable), Chris introduces all of the men, including a bunch of people I forgot and one person I am positive I’ve never seen before in my entire life. 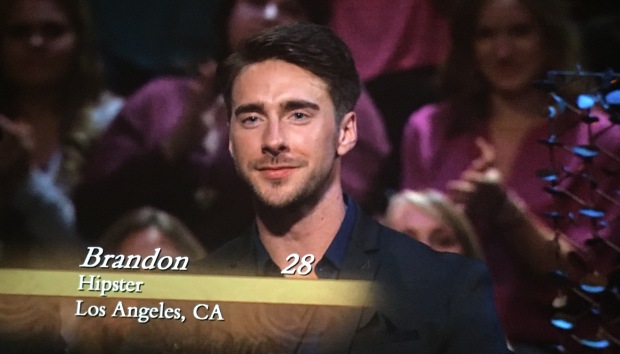 As Chris goes down the line to give everyone their 3 milliseconds of fame, Chase gets a HELL of an applause. Also, they introduce Luke after Chase. Um, guys? Chase was kicked off later than Luke. We all know that. You can’t go IN ORDER this entire time and then flip flop the two guys we remember mot vividly. I know you’re trying to tee up ol’ Luke for the Bachelor spot, but I’m pretty sure the crowd’s roaring reaction to Chase says it all.

They then recap the season, which can be summed up in one photo:

Now we get into the MEAT of the drama. Chad and his deli snacks. Derek vs The Cool Kid Clique. I forgot everybody hated Alex, but they did. Wells goes in on him, saying that because Alex is a marine he has lived his entire adult life in conflict and doesn’t know how to be a normal person. Wells, Wells, Wells! Comin’ in with the zinger.

Randos start voicing their opinions too and it’s like guys, really? You were on the show for two days. Nobody cares what you thought about any of this shit. Thankfully the guy in the kilt doesn’t make a peep.

It’s time for Chad to come out, and every single guy there is freaking the fuck out. They are all scared as shit, like they’re about to do a seance and resurrect Satan himself.

Turns out it’s for good reason, because since filming Chad has fucked TWO of their ex-girlfriends, which just goes to show that he was NOT KIDDING when he spewed all that shit about how his crazy ass was NOT going to back down once the show did.

Chris Harrison is all, “So just to clarify, Hope is Robby’s ex-girlfriend and Jen is Grant’s ex-girlfriend?” Chad’s like YEP, and they dumped those broads the second a Bachelor producer got them on the horn. Then I fucked them.

Nick stands up and is ready to fight, which is such an empty threat I can’t even. Oh, you’re really undoing your cufflinks to fight him right now? Sit down, Santa. You’re embarrassing yourself.

They don’t fight, because Chad explains that if they DID, they would slip and fall in their dress shoes and it would look stupid. When he’s right, he’s right! Best excuse to get out of a fight, maybe ever.

Some of the other guys throw insults his way and he CLAPS BACK with, “Your pocket square doesn’t match your shirt.” Oooo, burn! Got ya, bitch. Classic matching diss. 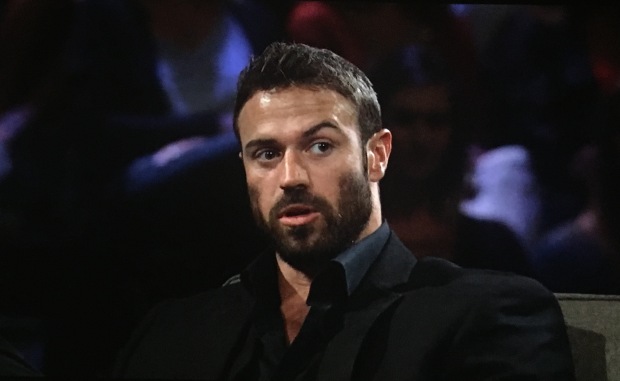 Except now Chad says that Robby threatened to beat up his ex-girlfriend if she talked about their relationship to the press. Look I’m certainly not on Team Robby, not now not ever, but there is NO WAY Robby said he was going to BEAT HER UP. What was he gonna do, roll up his linen shirt, kick off his loafers and pound her face in? Doubt it.

Evan wants his wormy time on camera, so they talk about the infamous shirt ripping. Turns out Chris Harrison “pulled the tapes” from what I assume is the dusty old library where they keep all the footage of people sobbing in the backs of vans, so we are going to be able to watch it back and discuss. I personally think Evan was being aggressive/a little bitch, but I’m not the ref here.

Luke is in the hot seat, and I completely forgot that when he first met Jojo he rode in on a unicorn, so there’s that. He explains that after he went home he was having anxiety attacks a couple times a week and it’s like yeah, bro, I bet you were. That shit looked fucking traumatic. Here’s him watching back said trauma: 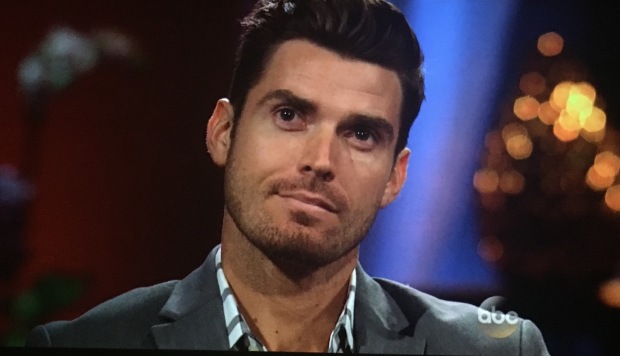 Chris Harrison keeps saying things to him like, “So you’re ready to find love again?” and it’s like we get it, you want him to be the next Bachelor. But if that applause meant anything, I’m thinking America wants Chase.

Chase talks to Chris next, and boi is looking pret-ty fucking good.

For as boring as I found him week after week, I’m starting to really get on the Chase bandwagon. Sure, he’s not the sharpest tool in the shed, but it’s not like Ben Higgins was a fucking rocket scientist. (“Should that be my next career move?” -Ben)

Jojo finally comes out to face more ex-boyfriends than anyone should ever have in their lives, and here’s how Luke and Chase are feeling about seeing her:

James T. tells her that she’s better than all of the dating apps (LOL). Chad does the opposite of that, and tells her that Robby broke up with his ex to be on the show and Jordan is a fame whore whose own brother won’t speak to him. In my mind he then immediately made finger guns with both hands and mimed blowing them out. Jojo’s not thrilled about what he has to say.

Now Alex wants to know how Jojo feels about the way they broke up. I’m going to go out on a limb here and say she probably feels nothing.

Vinny’s mom shows up to do some kind of comedy bit about how great Vinny is, and it’s like honey, I don’t even recognize Vinny without his weird hairline so you’re going to need to slow down and then also point him out to me.

And put your belly button away, Derek. Gross.

Jojo talks to Luke and Chase, and it’s the classic Men Tell All-type shit where they really want closure but she seems like she really DGAF. In like, a nice way though.

We wrap up by watching a blooper reel where Jojo gets mauled by a wild dog.

Was that supposed to be funny?! Jesus Christ. Terrifying. Next week, Jojo is a hysterical mess! Do they fly Neil Lane to Thailand? I bet they do!!

Read the fantasy suite recap here. Or other ones here.

Or read my Twitter feed. It’s kind of silly.

PS, is this whole special just a round-up of suspected sex predators? More on that at eleven: