Guys, we made it. The penultimate episode of The Bachelorette, where we get to FINALLY hear the intense opinions of boys who went home on night 3.

This shit kicks off by taking a look back at past Men Tell All memorable moments, and I’ll be the first to admit I NEVER saw the one where Ashley and JP got a god damn sonogram on TV. Like, wheeled the fucking machine out to see if they were having a boy or a girl. Have y’all never heard of cutting into a blue cake? What the fuck.

They also show a clip from Kaitlyn’s Men Tell All when they confronted the cyber bullying she faced when she slept with someone like, ONE day earlier than a bachelorette normally does.

I forgot how fucking ruthless people were to her, but I stand by the fact that if anyone ever said that to me I would literally scroll through Twitter with a glass of wine just taking screenshots every time someone called me a filthy whore so I could send it to all of my friends. Bring it on, babies. Hilarious.

But now it’s time to greet the men from Rachel’s season, and I’d like to point out that 1) they’re still going with Jack Stone’s full god damn name, which makes me feel 100% less crazy for ALSO referring to him only by first and last name. (I thought that was a thing I maybe made up but apparently it is not!)

And 2) model Brady is nowhere to be found, I assume because he is too busy in NYC modeling with Wilhemina or some shit.

We start by digging up the drama between Blake and Whabooooom Lucas, even though honestly if you told me that shit happened when I was in 6th grade I would believe you, that is how long ago that feels like. Adam tries to make a weird pun by saying, “whaboom should’ve been wha-bye” and it literally makes me hate him. Don’t clap for him. We can’t encourage that kind of pure shit comedy.

Now Demario explains to everyone what a side chick is and I’ll be honest, this seems like new information to Jonathan.

Iggy also wants to talk about his time in the house, presumably because America gave a collective BOO!!! every time he said he felt “protective of Rachel,” and I can’t get a read on how Josiah feels about it? 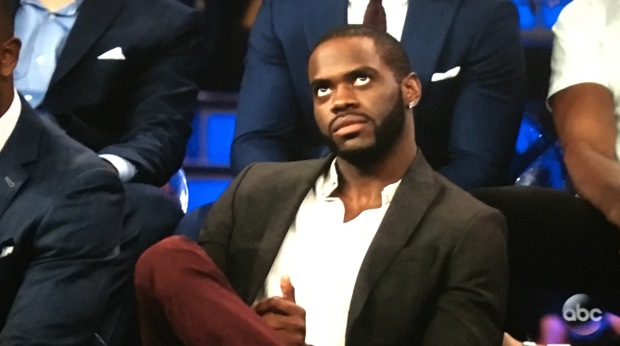 I’m kidding, he has zero respect for him. Also Iggy is doing some kind of fashion thing where his necklace is on the outside of his suit and it’s bad.

Yet all of this is child’s play in comparison to the hot goss we’ve been bracing for: Kenny. and. Lee. And because this topic is such a loaded issue, let’s ease into it by saying that I absolutely CANNOT with Lee’s teal shirt.

Don’t wear that. Have you ever seen Brad Pitt wear that color shirt? George Clooney? The Rock? I rest my case. (“Great use of that legal phrase!” –Rachel to me if she read these)

Anyway so they discuss Kenny’s beef with Lee, how Lee treated everybody in the house, all that shit, and I swear to god if they don’t bring up Lee’s racist ass tweets in this Tell All special I’m going to write a letter to my alderman.

But Will drops in a line about “social media” and when he does I watch as Lee’s eyes dart in literally 40 DIFFERENT DIRECTIONS in the span of one second. 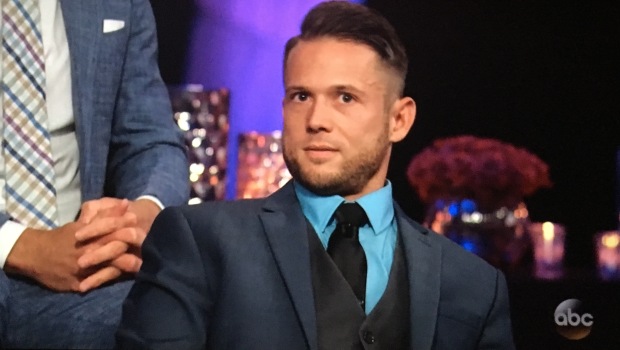 Do you see the vein on his temple? Jesus Christ.

To take a break from the intensity, Kenny’s daughter Mackenzie comes out to say hello and it is adorable. HOWEVER, her age is very unclear to me. I thought this girl was like, ten years old and here is someone who is maybe fifteen sitting next to him? Am I insane? Like seriously holler if I’m wrong but this shit is confusing to me.

Either way she is so sweet and lovely. She says she’s proud of her dad because he placed #8, and I hear myself cackle out loud because I feel like we should be telling every single person sitting up there right now what # they placed. That’d be rich.

But finally. Guys. We made it. Lee is in the hot seat, and he’s going to have to answer questions about… THE TWEETS. In fact, Chris Harrison would like to GO THROUGH THEM. 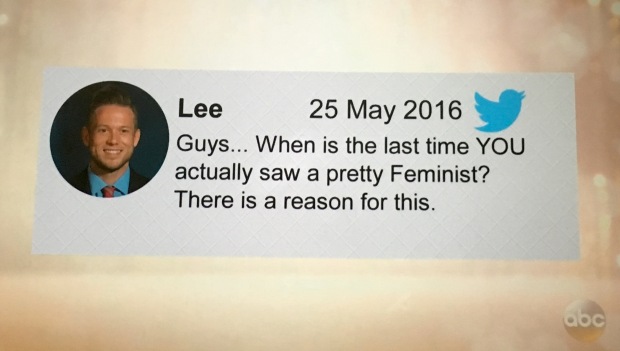 You know the last time I saw a pretty feminist? When I looked in the god damn mirror this morning, you piece of shit.

But nobody cares what he has to say about women when he’s got gems like these on his feed: 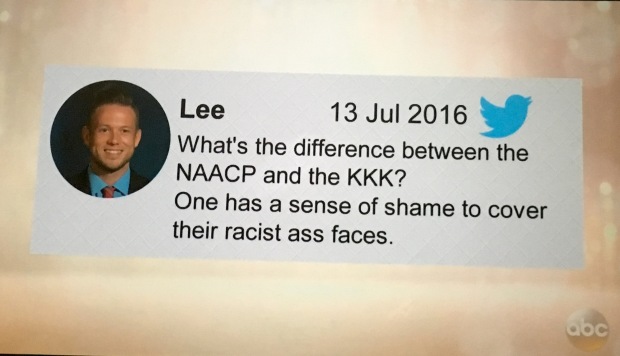 He is in like, the hottest of all the hot seats. It’s made of metal and has been sitting in the god damn roasting sun for five hours. That’s how hot.

Lee is pressed on his comments and responds with, “I don’t like racism at all, okay?” And everyone is kind of like… MMMMmmmm but….. MMMMM.

Also he keeps vaguely explaining that what we all saw was “half of a tweet” and that “Facebook cut off half of it” which is NOT A THING, LEE. If you tweet something, it can be posted to your Facebook. If you post something on Facebook, it will not get tweeted. I may be dumb as fucking rocks when it comes to investing in index funds, but I know a thing or two about Twitter.

I’d also like to hear the full statement that Twitter so viciously “cut off.” Go on, I’ll wait. ‘Cause I’ll tell you what, you can cut a slice out of a shit pie and I can still tell it’s a piece of shit pie, ya know? (Full transparency: I’m wine drunk right now.)

Josiah wants to know why he went on the black bachelorette, Chris Harrison wants Lee to admit the things he said were racist and sexist and that he IS racist and sexist, and I am SO uncomfortable with Lee’s squirmy responses that I literally want to barf. (It might be the wine.)

He keeps saying he has a lot to learn but it’s like bro, you’re 30 god damn years old! If you just realized in the last 12 months that you’re a racist asshole, I don’t know if there’s hope for you.

But now we must move on to Dean. Oh, Dean. Lovely, pure of heart Dean. We of course relive his journey aka a NATIONAL TRAGEDY, but Dean makes us all feel okay again when it is revealed that he is wearing suspenders.

Amazing. What a doll.

Also now is a good time to point out that they gave Jonathan a chair made out of a giant hand because he tickles and uses giant stuffed hands or something.

Why did they make him sit in that chair!! That is honestly psychotic on the part of the producers.

Rachel comes out and talks to Dean, and truly doesn’t fucking give him any closure but we DO know he’ll be on Bachelor in Paradise this season, so I have high hopes for him.

He doesn’t really have a good comeback to that, so instead just laughs and makes this exact expression:  ¯\_(ツ)_/¯

She then has to talk to Lee and seems a bit, how should I say this, salty as shit about the things she saw watching the show back. He truthfully does not seem thrilled that he packed his BEST TEAL SHIRT and came all the way out to LA to be called a racist on TV, even though I think he knew what he was in for.

Now god damn Fred wants answers and it’s like dude, all I want to know is what the fuck you did at summer camp, okay? Why is Rachel legit AFRAID of you because of one fucking summer when you were nine? HOW MANY WEEVILS DID YOU KILL??

Thankfully the blooper reel swoops in to distract us, and I learn that Dean stores gum behind his ear and that Josiah’s middle name might be Skewers on Skewers!

That about wraps up the Men Tell All, and I’d like to just say that Jack Stone was not mentioned or talked to a SINGLE TIME after they introduced him, and he had by FAR the saddest one-on-one in possibly the history of the franchise. NOT COOL, ABC.

Tune in next week for the BACHELORETTE FIN-AHH-LE!! Can’t wait to see why all the teasers have Rachel sobbing in no makeup. Looks real neat!

One thought on “The Bachelorette Men Tell All recap: “Ocular Facts””