GUYS!! HOMETOWNS!! Let me start by saying that the thought of my parents sitting in a bachelor confessional talking about the love I have for a person I have known for six weeks is HIGHLY SUSPECT, but I love me a good fucking hometown so LET US BEGIN.

We left off in Bimini with Christina’s ass being sent home. The girls are all shook as hell, and when Nick comes to talk to them about what’s happening, Corinne literally can’t even. 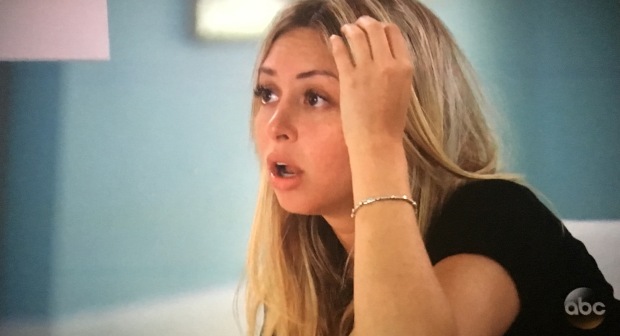 Girl is tripping harder than a basic bitch in Louboutins. But Nick tells them that he would love to go to all four of their hometowns, and proceeds to initiate a weird seated rose ceremony. 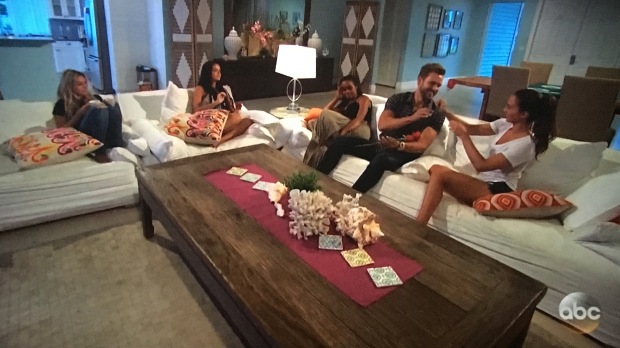 Raven’s date is up first and they meet in Hoxie, Arkansas, which has a population of 2,780 according to the 2010 census. (“I love learning!” -You guys)

Upon arrival, Raven shows Nick where she dumped her ex’s body after bashing his skull in with a stiletto last February.

JK, that shit is full of grains. She takes him up to the top and a cop shows up to be like, “What in tarnation!” The cop asks Nick for ID and Nick doesn’t have any on him.

Um, what? You don’t have a fucking ID on you? If I were with someone who may or may not have (did, admitted guilt on camera) bashed her ex’s skull in with a stiletto, I would bring some fucking ID with me. Juuuust in case somebody needed to ya know, identify me.

ANYWHO! So I guess the cop is her brother and it’s like um, duh. You think these fucks didn’t get a permit to film and a real cop is showing up? Ya right. ABC has their location permits IN ORDER. They run a tight god damn ship over there.

Later they go redneck jet skiing, which is a phrase I just coined, I think. (I don’t want to Google it because if I didn’t make it up I will feel sad.)

Then, THEN, they do something terrible, which is lay down in the fucking swamp.

NOOOOoooooo!!!!! I am crawling out of my fucking skin. I can’t even begin to think about what brain-eating parasites are swimming up her god knows where holes or laying eggs in her hair extensions. Does your head itch? Mine too. I can’t. I just CANNOT.

They go home and meet her parents, who are very nice and her dad announces that he’s cancer free and Nick keeps applauding at weird times. The rest of her hometown date is truthfully boring, but maybe I’ve had a bit too much pinot and I’m ready for the DRAMA that I’m sure is to come later in this episode.

Next up is Rachel, who has, “all of the qualities he’s looking for in a wife,” which is the Bachelor’s #2 catchphrase behind, “Ladies, this is the final rose tonight.”

See, here is the thing about all these betches. Sure, they may have all of the qualities you are hypothetically looking for in a wife. But which one of them is going to eat fucking Totino’s pizza rolls with you while you sit on your kitchen counter drunk as shit and she wipes her mascara off with a makeup wipe, ya know? That is like, not one of the “qualities” you’re thinking of on this show but it’s the MOST IMPORTANT PART OF LOVE.

While I write a letter to my alderman about this, Rachel takes him to her huge ass church. 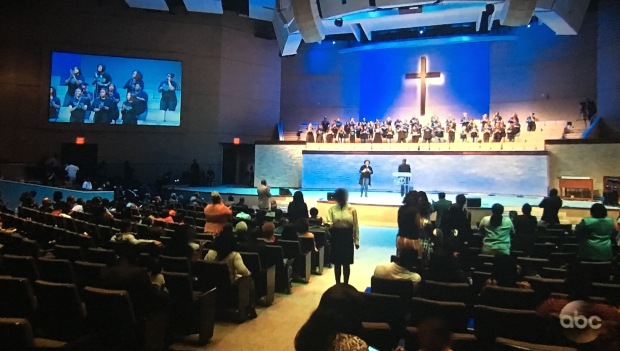 Now is a good time to note that I do not ever want to be taken to a church on a date unless we’re in motherfucking Paris and it’s a dope ass cathedral and you’re buying me a croissant immediately afterwards. Religion is not my jam.

But Nick is like okay, I can do this, just clap along to the music.

Then he meets her family minus her dad, who can’t make it because he has “work obligations,” which is almost as fake of an excuse as, “he went out for cigarettes,” but that’s okay. He’s a judge! He can’t be on TV accepting flowers from some rando! I get it, Mr. Lindsay. Stay classy.

So they eat dinner and Nick isn’t totally clear what okra is, which is only the beginning of several awkward conversations about race and culture that will take place in this household tonight. Rachel’s brother-in-law jokingly refers to Nick as, “a white” and I don’t know what to do, they don’t know what to do, nobody knows what to do, so they just laugh uncomfortably.

But Rachel’s family is actually lovely, and her mom is cute as shit so I think it went well.

In Miami on Corinne’s date, she takes him shopping, obvi. They go to fancy stores, they drink champagne, and Nick looks really, really great in what she picked out.

Can you say DAPPER!!! Corinne drops $3,478 on an outfit for him and bitch signs that receipt like it ain’t no thang. I love her to pieces for it, but my obsession is sealed when she attempts to wink at the camera.

She’ll work on it.

At a delicious lunch spot called Carpaccio that my friends and I used to eat at when we were young vacationing teens in the MIA, Corinne tells him that she loves him, and it is here when I realize what a spoiled ass bitch I am for having eaten lunch at a location deemed BACHELOR I LOVE YOU WORTHY when I was only fifteen. (Thanks for those lunches, mom. Pretty sure I used your credit card and look, I turned out to be a successful, independent adult! KIND OF???)

So Nick goes to her family’s condo and meets everybody, and Corinne’s dad does a spot on impression of me five minutes ago. 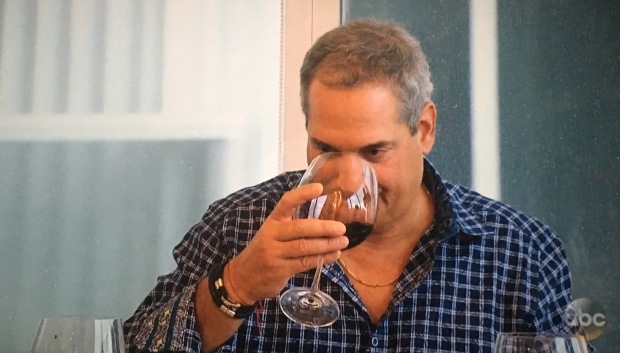 But nothing is more CRUCIAL to Nick’s success with Mr. and Mrs. Corinne than passing the age-old family olive test. He puts one in his mouth, swishes it around, and the entire fambo waits with bated breath.

Turns out he does not like olives, but says that it is the best olive he’s ever tasted. (I’m sure he only muttered under his breath that it tastes like a salty turd.)

Nick then talks to Raquel the nanny instead of Corinne’s mother, which I think is really an accurate representation of everyone’s contributions to her upbringing. 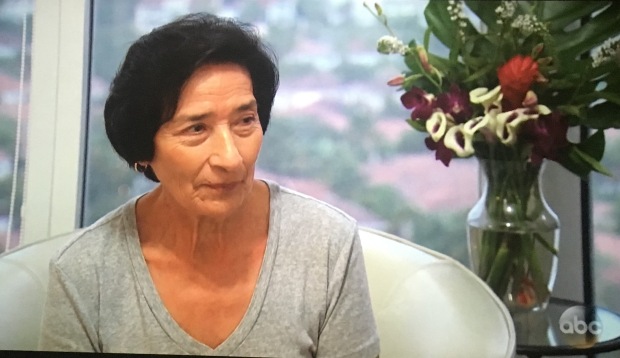 Corinne talks to her dad and he is like what’s Nick’s job, kiddo?! She doesn’t know, because obviously his job is this show so technically Nick is at work RIGHT NOW, but she can’t SAY that, even though I’m sure a line producer was passing out time cards to everybody while they waited for the elevator up to this very condo an hour ago.

But Corinne’s dad won’t drop the job thing and is like no seriously, how is he going to pay for the lunacy that is your credit card bill every month? She says that she is happy to be the breadwinner, that she’ll totes take over her dad’s MULTI MILLION DOLLAR flooring business and Nick will be fine. Her dad finally shrugs and gives up, caving yet again to Corinne’s insane demands. (“But I want an Oopma Loompa NOW!!” -Corinne as a child)

For Vanessa’s hometown date he meets her in Montreal and completely hoards his umbrella.

It is very rude. They then go to Vanessa’s special ed school, where they make a scrapbook with her students. It is very touching, and I especially like the part where they glue pictures of their barf date together. 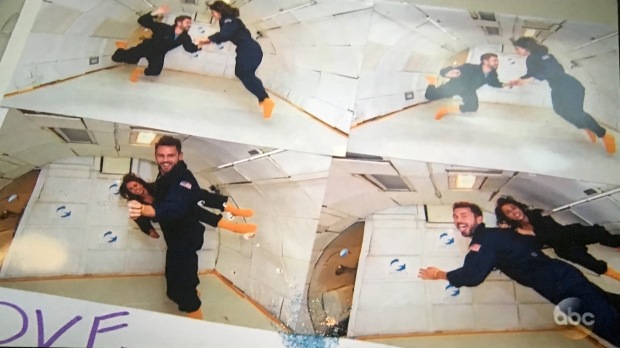 It looks romantic in the scrapbook, but I happen to have VIVID memories of her yaking all over the plane and it probably zero gravity-ed into hovering chunks of sick in the middle of the cabin. We alllllll remember it, Vanessa.

When it’s time for Nick to meet her mom’s side of the family, things feel ominous. It is probably the ominous music blasting in the background but still, I like to think I’m also intuitive.

Someone immediately asks Nick where they plan to live after the show wraps and he’s like, welp! We haven’t exactly touched on that yet! It’s not the best answer.

You haven’t talked about where you’re going to live? You’re trying to get engaged in two god damn weeks and you haven’t discussed, ONE TIME, the fact that there is realistically no way this relationship will work?

Basically everyone at this giant dinner is PANICKING. Her aunt, her mom, her sister, her brother. Everyone is crying. Everyone is terrified.

They just keep crying and screaming WHERE ARE YOU GUYS GOING TO LIVE?!?! Um, they’re probably going to live in None of Your Fucking Businessville.

But it’s time to head to Vanessa’s dad’s house, where Nick asks if the two of them WERE to fall in love and want to get married, would he have his blessing? Here is her father literally scratching his head at the question:

Now, if you’ve ever seen a season of the Bachelor, you know that this question is par for the weird course. It’s just the THING they have to ask the fathers, which I find pretty annoying and antiquated. I don’t have a fucking dowry, y’all. And why isn’t the MOTHER asked for a blessing, huh? This is the god damn patriarchy, at it again.

BUT I FEMINIST DIGRESS. So Vanessa’s dad is like well, did you ask the other three girl’s fathers for their blessings? I scream at my TV. Literally scream at it, because Nick is like faaaaak. 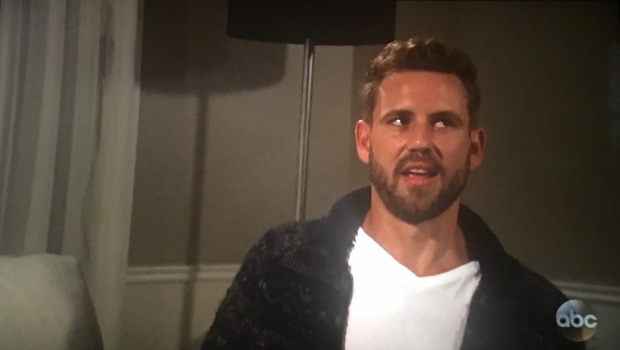 Vanessa’s dad knows this is and like bro, it’s a yes or no question. Shit is TENSE. Nick mumbles something unintelligible, and I am just sitting on my couch, pasta sauce AND chocolate from an ice cream bar all over my recap notes, gross and speechless.

Now Vanessa sits with her dad, and they start talking about this blessing shit and I turn to my best friend Natalie and say, “Is her dad gonna snitch??” And as the words float effortlessly out of my chocolate and wine-rimmed mouth, Vanessa asks her dad if Nick got the other dad’s blessings too. 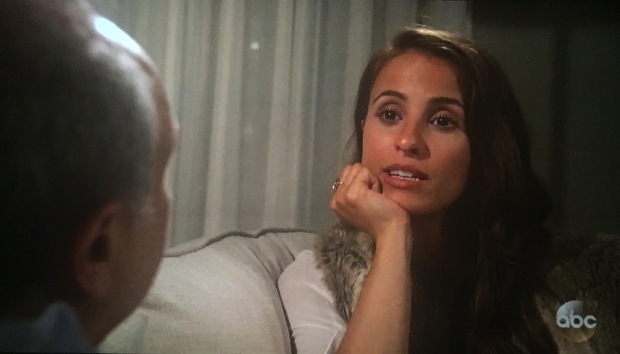 I am dying. Like, my soul is leaving my body.

Vanessa is now questioning everything because she somehow thought he was only in love with her even though I hope to god she’s seen this show before because if she hasn’t, this is going to be an UNPLEASANT several weeks for her.

Back in Brooklyn Nick is ready for the rose ceremony, but Vanessa is still upset and Rachel is still here for some reason even though we know she doesn’t win, and Raven’s hair is still too long and Corinne is still panicking. But then! There is a knock on Nick’s door.

He opens the door and she literally screams, “HELLO NICK,” so aggressively that I’m like we get it, you were given a line and maybe you were worried that the microphone wouldn’t pick up your audio so you were like fuck it I’m going to shout my salutations at him, but either way I was like WHOA, GURL. WHOA.

Tune in next week to see what the fuck Andi is doing here!! Probably giving him advice, which he should not follow because she was once engaged to Josh Murray.

One thought on “The Bachelor recap: “I’ll Hate You If You Break Her Heart””