Real talk, when I came home last night from a long ass hair appointment all I wanted in the whole wide world was to watch this shit. And because there is no God, my DVR only recorded TWO MINUTES of CHOPPY ASS footage. Le sigh. I tell you kind souls this because I was forced to watch it on Hulu this morning and my screenshot game has been seriously compromised. So if you’re reading this going, “Ugh, Sam, not your best” know that I KNOW THAT ALREADY so kindly fuck off. Now! Where were we?!

Princess Jasmine herself Ashley I. shows up to paradise, but not before explaining to Chris Harrison that for the last year Jared has been the kind of best friend that is super close to her, talks to her about everything, and occasionally touches her boobs. Did I mention she’s still in love with him? Her plan is to only cry three times this season, so get your Cry Counter ready.

Here are Jared and Caila the second she walks down to the beach:

They’re both like, “Well, shit.” Ashley quickly finds out that Jared and Caila are dating, and here we are at cry #1.

The editors of this television show make it look like girl is venting to a god damn parrot, even though we know that any time someone is off by themselves talking to weird animals on Paradise, they’re actually talking to a producer. 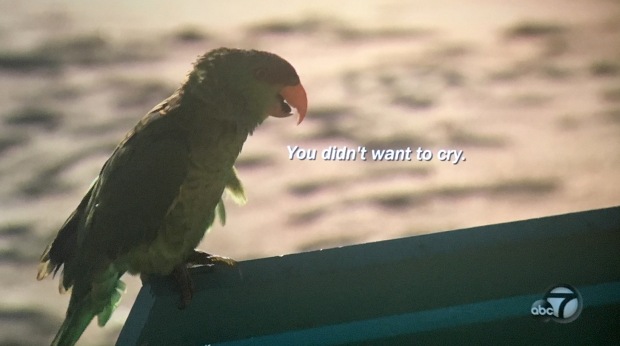 (It truly concerns me to think that at least a small fraction of viewers actually think she is talking to a parrot who is telling her to murder Caila. Like, that is definitely a thing at least 1% of people watching this shit think is ACTUALLY HAPPENING.)

Ashley talks to Caila and is basically like why, girl? Caila says that although she originally said he wasn’t her type, she talked to him. Annnnd now he is her type. Don’t have a lot of female friends, do ya Caila? 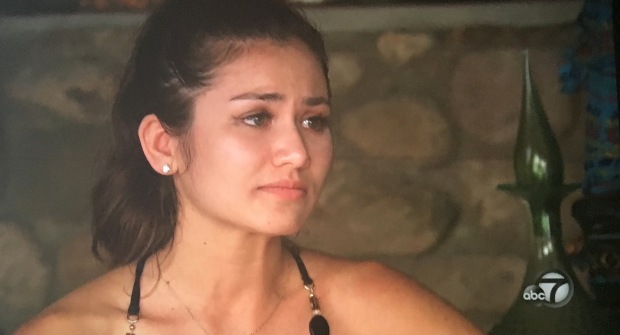 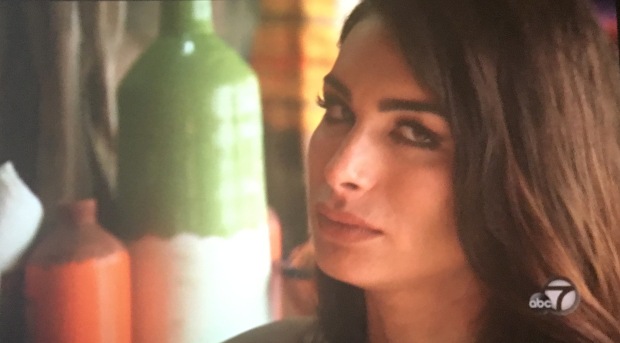 Ashley asks Daniel on her date because she has no other options. Daniel assumes they’ll be sacrificing a newborn calf, but it turns out they’re just going to eat dinner together.

She can’t tell if Daniel is being serious when he says he’s only bisexual on Fridays, and Daniel is wondering if she’d like any of his, “Canadian bacon with maple syrup drizzled on it?” Which I assume is also Justin Bieber’s opening line.

The date is fine but she’s still sad, okay? She’s still sad. She says that this week can’t get any worse unless somebody dies, which is really the most dramatic thing one can possibly say in a situation like this. She cries next to Ziplock bags of trail mix.

But you know what? I’m going to take a minute to defend this betch. Yes, my Cry Counter broke quite awhile ago as it’s impossible to distinguish which cries are part of other cries or if they’re their own separate cries, but she’s not entirely nutso. Seems to me like Jared has been leanin’ on her for some of his emotional baggage over the last year even though he doesn’t like her.

If you had to vote, do you think Jared calls her whenever he needs somebody or something? Yes. And even though he knows she likes him and he has no intention of dating her, he just wants to take advantage of her feelings for him? Yes. That is FUCKED UP, JARED. (“I’m Sam Jarvis, and I approve this message.” -Me in a pant suit right now)

Jenna gets to paradise and Nick’s dick perks up. They’re going to go on a date, but not before Evan has this weird medical emergency they’ve been teasing in previews for what feels like my entire adulthood. Except they DON’T SAY WHAT IT IS.

I don’t know how to read those numbers!! His ankle is red and swollen? He needs an IV? He wants Carly there? They literally NEVER. EXPLAIN IT. They just show them at the hospital and now Carly is into him again. Is he suffering from a sudden case of Enlarged Penis Disorder? How is his hospitalization what makes Carly realize they’re perfect for each other?

On Nick and Jenna’s date they go on a boat and she very clearly wants the D. Later they make out on a sandy beach that is infested with crabs and honestly it looks like my nightmare.

Nooo thank you. The next morning, Emily wipes Haley’s butt.

At the pre-rose cocktail party Caila is kind of stressed about the Jared situation, and Ashley I. is even MORE stressed about it. Nick tries to help her by going girl, this isn’t love. She doesn’t believe him because she’s never had sex before and I firmly believe that love as an adult is not real unless you are having sex with the person. (Maybe I’M the backstabbing whore. Things to think about.)

She talks to him and Jared is fucking pissed that she’s ruining his lovefest with Caila even though HE IS THE REASON she isn’t over him after a god damn year. Maybe be less of a needy bitch and she wouldn’t still like you.

Read Monday’s recap here. Or other ones here.

Next week we find out who gets what rose! If Lace and Grant aren’t engaged by the end of this shindig then I don’t know what’s real anymore.