I know you guys SAY the Olympics are cool, but if Chris Harrison isn’t hosting them I’m really not interested. (“What an incredible journey… of swimming laps in a pool.” –Chris at the Olympics)

We kick things off with a few new cast intros, which include Lace in all her elegance.

Meanwhile Chad’s in what I like to call the See Ya Never Van, drinking like a god damn fish while everybody else sits in the sand talking about that time he said he was going to murder everyone’s family. 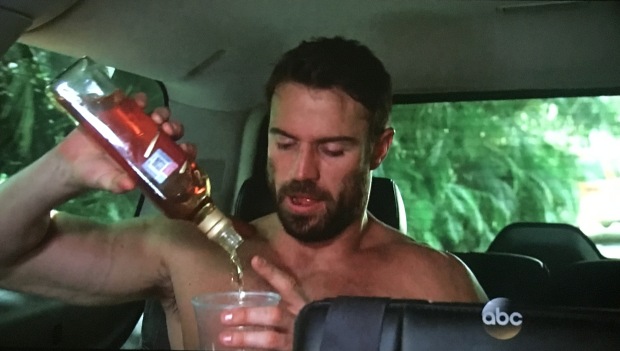 Leah arrives, and I am flooded with a wave of memories of this backstabbing betch. On Ben’s season she randomly started making up all these weird things about Lauren B. and of course Ben was like hmm cool story, Leah, let me walk you out.

So now she’s here, except she shows up looking like everyone’s overly accessorized aunt who wears one too many necklaces and smudges lipstick on your face every time she says hello. It’s a little sloppy.

She wanted to go on a date with Chad (of COURSE she did), but he is probably putting his sandals in a plastic bin while pushing a satchel through a metal detector at this very moment so girl is going to have to REGROUP.

All the girls immediately talk shit about her, because that’s what ladies do best, ya know? Feminism! Here’s Emily and Haley doing a pret-ty spot on impression of Leah’s lip injections: 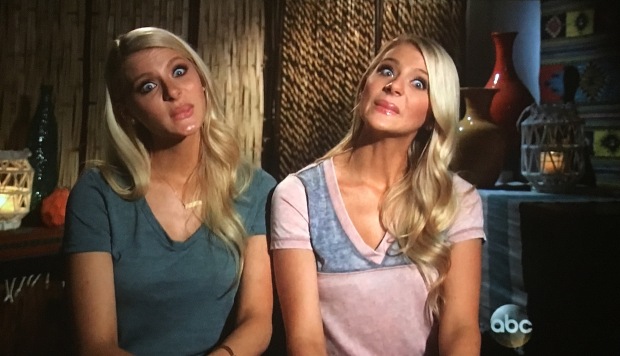 Leah asks Nick on a date, where she’s way into him because she is attracted to that “lumberjack look.” Um, Nick is like, 160 lbs soaking wet. And he’s playing Ball in a Cup:

Don’t get me wrong, he’s the definitely the most fuckable there, but let’s not get carried away. Lumberjack feels inaccurate.

Back in paradise Amanda is bummed. She liked Nick, okay?! And then he went out with LEAH!! But because these producers can smell a good beef better than my dope ass dog (RIP Ralph), they give Nick a date card as soon as he comes back.

So here’s where things get silly. Leah literally thinks they are going on another date. Ha! I can’t. I love it so much, I truly can’t. She quickly learns that he is going with Amanda instead and it does NOT sit well with her. 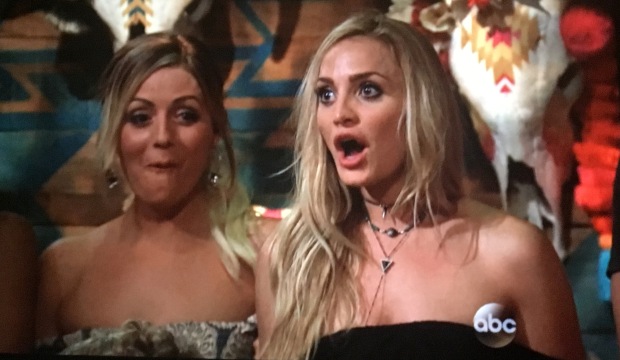 She gets very Single White Female on Amanda’s ass, and proceeds to hover behind her while she gets ready for her date, whispering weird things in her ear like, “We use the same eyeshadow palette,” and I’m starting to wonder if Leah has an alter ego called the Sephora Strangler.

She tells Amanda that they have the same look and Amanda’s response to that is, “Hm,” which is maybe the best thing ever. That is girl code for, “Aw, sweetheart, you are not on my level. That’s cute that you thought that though.”

So Amanda and Nick go on a date and every time she says something about being a strong woman/the opposite of a doormat I hear the faint sound of Nick’s erection tapping on the underside of the table. He is very into it. They find a beach and make out. 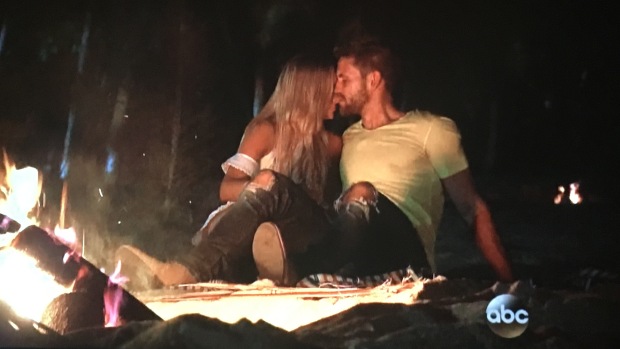 While Nick is busy adding Viall to the end of her kid’s names in his head, everybody else in paradise is starting to pair off in a desperate attempt to get a rose this week.

Suddenly I hear Carly say that she is wondering what kissing Evan is like and STOP EVERYTHING, hold the god damn phone, everybody shut the fuck up and watch this.

She wants to see his “aggressive side” and I’m like girl, I don’t think there is one. She tries to flirt, says she’s going to bed, she basically does everything but shout I WANT THAT D and he still doesn’t read the signs. She goes in for a kiss and it is SO AWKWARD I want to crawl into a hole and die. I mean it’s not as awkward as her horrible, horrible extensions but it is definitely in that arena of bad.

Evan is now in love. He thinks that whole interaction was awesome. Carly disagrees.

She doesn’t understand how he has two children and it’s like way harsh, Tye! Maybe he’s not aggressive but at least someone agreed to marry him at one point and I can’t say the same about you, babe! (“Oh SNAP!!!!” –You guys)

Meanwhile Lace and Grant bone. Here is them realizing that the blanket they put over the camera fell down á la American Pie:

At the cocktail party before the rose ceremony, Vinny gets himself in a little hot water. 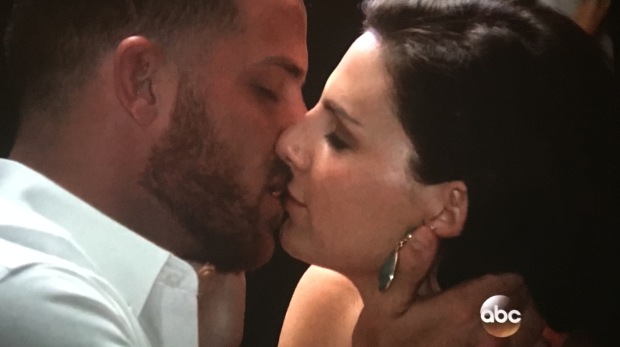 Leah talks to Nick and absolutely butchers it. She thinks she is a pile of piping hot shit, so everything she says to him has a veil of crazy delicately placed over it. Nick is basically like look, I’m into Amanda because she is beautiful and you look insane right now.

I mean, so many interesting choices going on there.

Leah needs to throw a Hail Mary for this rose and therefore talks to Canadian Daniel, where they immediately get into a heated discussion about whether she is an onion with layers that will make him cry, or if she’s a plain ol’ dumb ass orange. I’m telling you, Daniel truly cannot look at a woman without envisioning his complicated produce ranking system. It’s very important to him and I think if I were there he would decide that I am a cantaloupe, which I guess is fine.

Daniel also talks to the twins and mimes blowing his brains out, which makes me giggle.

At the rose ceremony Lace takes Grant’s rose and possibly the morning-after pill, Emily gets Jared’s, Amanda gets Nick’s, and Vinny gives his to Izzy, which makes Sarah sad. But Daniel comes through in the end and gives his rose to Sarah instead of Leah. Bye Leah, bye Jubilee.

The next morning everyone is feeling pretty jazzed about their situations, until Josh Motherfuckin Murray walks in. All of the girls cream their pants because of that smug ass smile on his face.

Let me say on record that I do not find him attractive. He is a classic egomaniac, and honestly something about the way he talks makes me want to push him off a cliff. However I am alone in this thought, because every single girl here wants to fuck him.

He is of course into Amanda, sparking the 2nd Annual Josh Steals Nick’s Girlfriend Picnic and Potato Sack Race. He takes her on a date on a boat, which I guess is romantic but I’m truly concerned about how much the boat is going up and down, up and down, up and down. If I were on that date and Josh asked me what I was looking for here in paradise, I’m pretty sure I’d say DRAMAMINE, PLEASE, FOR THE LOVE OF GOD.

Meanwhile Nick is tripping the fuck out:

He is very worried about his relationship with Amanda, as he should be.

Also Josh tells the cameras that this process, “Definitely worked before” which is an interesting way of saying, “I got engaged and all I got was my ex-fiancé’s tell-all book exposing me for the piece of shit I am.” Really seems like this process did NOT work before.

Carly is avoiding Evan, so obviously he asks her on a date as soon as he gets a date card. (Some team of producers in an air-conditioned trailer just sit there all day sipping mojitos and watching show footage going, “Okay who gets this date card? Who do we want to fuck with next?”)

She doesn’t want to go on the date but feels like she has to, so she does. They try to break a world record for the longest habanero kiss and let me tell you I would fail instantly. Not my jam. She has to kiss him for 90 seconds after eating a fucking pepper that is hot as SHIT and you know what, karma is a bitch.

Like we get it, you think Evan is gross and he’s a bad kisser. Shut the fuck up already. You’re past the line of being funny and now you’re being just a straight up bitch. I’m glad that pepper is burning your mouth.

Meanwhile Emily wants to move her relationship with Jared forward, and he is really not making it easy for her. So far they’ve connected on the very deep, emotional level of having the same favorite color.

But Emily is no fool, girl literally gets guys to like her for a living so she knows how to wine and dine and compliment the fuck out of them and talk about paintball. So she does, and he kisses her. Bing bang boom.

When Josh and Amanda get back from their date, Nick and Josh start one of what I assume is several heated discussions.

Then Josh makes out with her in front of everyone, because that is SO JOSH.

I would tease what we have to look forward to next week but this shit is TONIGHT. AGAIN. Like seriously guys, it’s a lot. I haven’t watched Real Housewives in weeks because this shit is taking over my entire DVR. I hate it. (I’m kidding, I love it.) 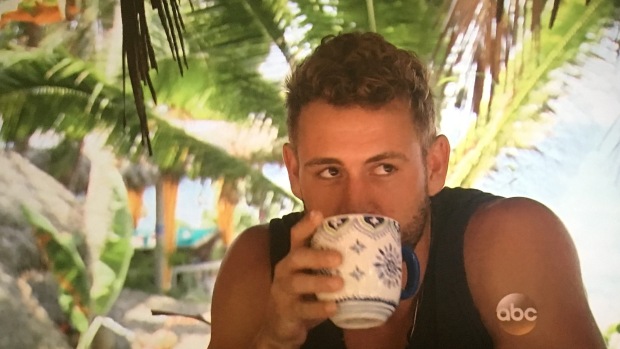 2 thoughts on “Bachelor In Paradise Recap: “So Do You Both Have Scoliosis?””