And I can eat an entire Dominos pizza but you don’t see me bragging about it.

I fucking DARE YOU to be out of long johns.

Honestly bread is one of the only things that does calm me down. 😦

If the Real Housewives franchises were 90s pop stars, Beverly Hills would be Britney. Sparkly, rich as shit, and slightly medicated.

Look, I have no goddamn clue who new housewife Erika Girardi is (Google tells me she is a dance pop star), but this bitch’s tagline is pure gold. She goes, “I’m an enigma wrapped in a riddle and cash.” Um, WHAT? Girl, what the actual fuck are you talking about.

Meanwhile Lisa Vanderpump loves dogs but isn’t “crazy about bitches” which made me go, “HA!” into my bag of Pirate’s Booty. We’re off to a good start. Also she’s turning into my old Anastasia Barbie, which is not even a joke so much as it’s a fact.

Kyle tries on sunglasses that are $75,000, completely blowing ol’ Dana “These sunglasses cost $25,000” Wilkey out of the fucking water. Kyle could’ve gotten a much better deal had she checked out Cynthia Bailey’s eyewear line but that is a story for another day!! And another city.

Yolanda is still sick and explains that she’s been living in her and David’s condo for the last 9 months so it’s easier to get treatment, but everybody who just read about their split on Perez Hilton is going OH SNAP.

Lisa throws the first pitch at a Dodgers game and this is Bravo’s attempt at sports coverage: 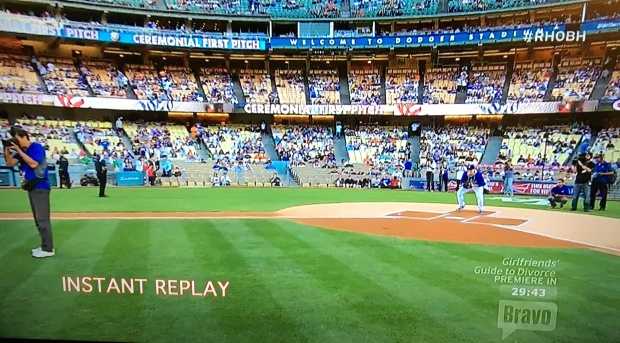 Lisa Rinna explains that her kids work for their money and her daughter has a job in a deli making toast. The second she says it she bursts into genuine laughter. LOL. Toast. She’s all, “You wanna Maserati? You better work, bitch!” (Second Britney reference. It’s her birthday today, guys. Show some respect.)

Now we’re spending way too much time on her teenage daughters in bathing suits and I am very uncomfortable. At first it’s like oh, cute suits. Then it’s like yeah we get it, they’re a little tight on them. Now it’s like GUYS PLEASE STOP PANNING UP AND DOWN, I DON’T WANT TO END UP ON SOME KIND OF LIST.

Yolanda decides she’s well enough to stop by Lisa Rinna’s birthday dinner, except she doesn’t wear makeup and these women have a complete fucking meltdown about it. Like, CANNOT HANDLE IT. Kyle goes, “A woman going out to dinner without a stich of makeup is like, shocking.” Vanderpump’s all, “Nothing on her face, not even a little under eye concealer.”

Guys, this bitch was a model. She looks better than I do after getting my makeup done at one of those fancy ass counters. Chill.

Harry Hamlin buys Lisa diamond earrings and it’s one of those things where they all go aw, those are pretty! And move on with their lives/arugula salads. For diamonds that size, the correct response is to faint.

Yolanda leaves and we’re back to discussing how fucking ugly she looks without makeup. Give it a rest, ya catty bitches!

Because Bravo is my spirit animal, they intercut Ken going, “I told her she looked better, but she didn’t” with Yolanda saying to her friend, “They’re nice, huh?” Ken also says it’s always nice to have a man tell you that you look good. Bro, I don’t need a man to tell me I look good. I have a mirror.

I am so PUMPed™ for this season I can’t even stand it, although I’ll admit I’m missing Kim and Brandi. JK, Brandi’s terrible.

Check out more of my show recaps here.