Nothing screams Golden Globes like Sam Jarvis sitting on her couch with a whiskey, wondering where the fuck she went wrong. (If you’re already opening a new tab to Google Sam Jarvis, it’s me, guys, I’m talking about myself.)

We jump right into the award season action with a parody of La La Land, which is cute but a complete waste of Justin Timberlake. If he’s not going sing or dance, why did you show him to me? Jimmy Fallon, always a cock tease. What we do get a lot of, are close-up shots of Fallon’s fucked up finger that he ALLEGEDLY broke while bombed on the hooch.

Look how crooked that finger is. At the time he was like, “Guys I’m fine it’s no big deal!” Your sideways finger would beg to differ, bud.

Anyway so it’s time to start the show and of course the teleprompter is immediately down. Ain’t that always the way. Jimmy goes into a brief panic before blurting out, “I can do impressions!!” Which is also what I assume his dying words will be.

Aaron Taylor-Johnson wins supporting actor for his role in Nocturnal Animals, and Billy Bob Thornton wins actor in a TV drama for Goliath. Then for some reason the announcer guy introduces Hugh Grant by saying he won for Florence Foster Jenkins even though he didn’t? Shit’s really running smoothly here. Like clockwork, if time was EXTREMELY relative.

Now Timothy Olyphant gets on stage and boy, is it hot in here?? 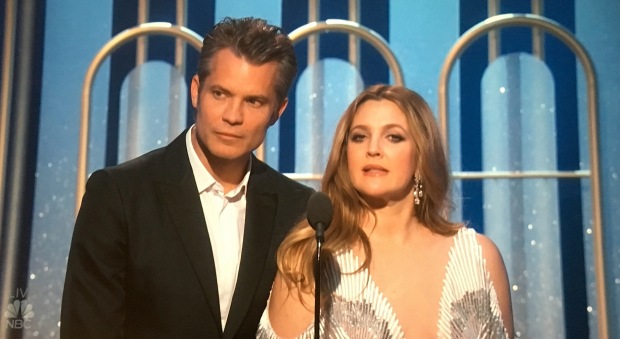 I’m into it. Tracee Ellis Ross wins best actress in a TV comedy for Blackish, and Atlanta wins for best TV series, comedy or musical. I am extremely happy for Donald Glover, whose career I admire A WHOLE LOT.

The president of the Hollywood Foreign Press talks and is so boring that we are all Denzel Washington watching him speak: 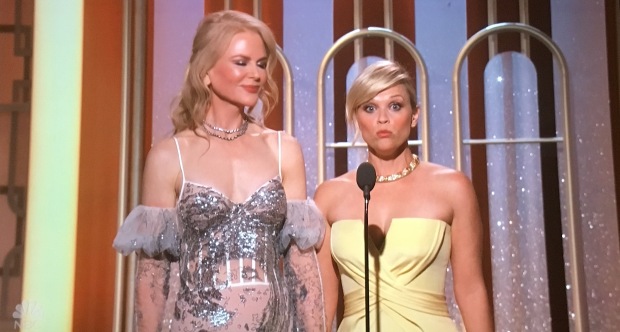 That OJ Simpson shit wins, which is very predictable but leads me to wonder why the entire table of people have to get up to accept an award when a TV show wins. This is of course the most hypocritical thing I have ever said in my life, because if my TV show won you bet your ass I would be BOOKING IT to that stage. (“Everybody, come on!!!” -Me to my whole table)

Anyway the woman accepting the award for the OJ shit is wearing what I lovingly refer to as “Power Pins.” LOOK AT THESE PINS:

But nobody, NOBODY, will out-sparkle John Travolta on stage, no way Jose, so here he is competing with betch’s Power Pins with his own Sparkle Suit which yes, is pinstripe.

It’s time for the award for the best supporting actor in a limited series or TV miniseries and it’s like GUYS. COME ON. Was this shit on TV, or in a theater? Those should be the two categories. They are saying so many fucking words for each thing that I’m wondering if at some point I will be nominated for Best Sitting on her Couch Off Melrose Avenue With Blonde Hair and Running Shoes On. Let’s not be so SPECIFIC, you feel me?

La La Land wins for best original score and best song, and Viola Davis wins for supporting actress in a movie. Everybody keeps saying Hidden Fences and I can’t even LOOK at Twitter right now because I know it’s just JOKEZ ON JOKEZ!

For best actress in a supporting role for a limited something-or-other, Olivia Coleman wins for her work in The Night Manager. Then Dev Patel and the most adorable child I have ever seen in my life talk about their movie Lion.

LOOK AT THAT CHILD!! Amazing. Easily my favorite part of the show. I truly cannot picture smiling more than when I look at his lovely happy face. (“Siri, when does a woman’s biological clock start kicking in?” –Me, later tonight)

Amy Schumer and Goldie Hawn get up to present something and do this bit about how Goldie can’t read the words. It’s a little heavy handed but I’m just glad we got through it together and that Ryan Gosling wins for what I assume is best actor in a musical comedy movie. 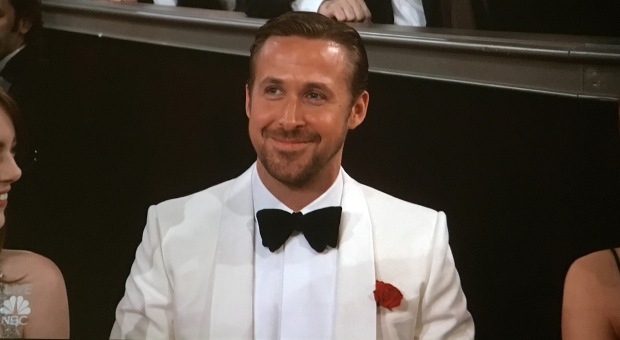 So Ryan wins, and his gurl is not here!! Like, where is Eva? But he just goes, “Sweetheart, thank you,” and it’s like dude doesn’t even have to SAY HER NAME and we feel her presence on Gosling’s D. Straight bad bitch, that Eva Mendes.

La La Land wins for best screenplay, Zootopia wins for best animated movie, and then they do a very strange memoriam that is literally just Carrie Fisher and Debbie Reynolds. I think it’s a nice decision but totally caught me and I’m sure GENE WILDER off guard.

Best foreign film goes to Elle, and then Anna Kendrick and Justin Theroux get on stage and my boyfriend goes, “Is that Justin Aniston?” so it turns out we’ve BOTH got jokes in this household!! 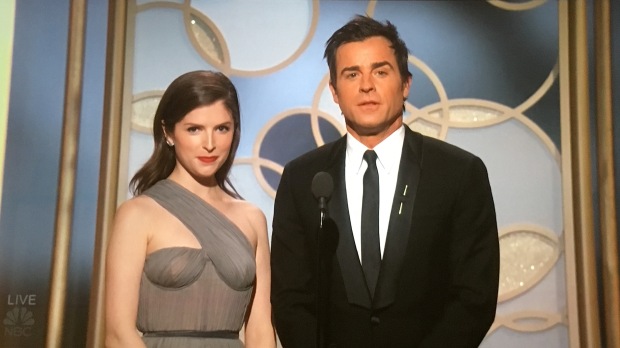 Best actor in a limited series or TV movie (if I keep having to type those words I’m going to jump out my window) goes to Tom Hiddleston, which means that Taylor Swift is in a house in the Hollywood Hills chugging a Solo cup of dry ass pinot grigio texting him, “Congradulations!” and yes, I meant to spell that wrong.

Best actress in a blah blah blah goes to Claire Foy (can you tell these award shows are too long? I’ve lost the will to live), and Claire is embodying my princess dress dreams right now.

So Viola Davis comes out and starts talking about apple pie, and seems to be sharing this intimate moment with Meryl Streep. I am not 100% sure what’s happening right now but I think if I just sit here with my eyebrows furrowed for long enough the truth will reveal itself.

And then it does reveal itself! Meryl wins a Golden Globe for a lifetime of stomping all over everybody else’s careers. She gets up and gives a speech that I’m pretty sure Trump will love (SARCASM!!) and Viola couldn’t be happier for her. 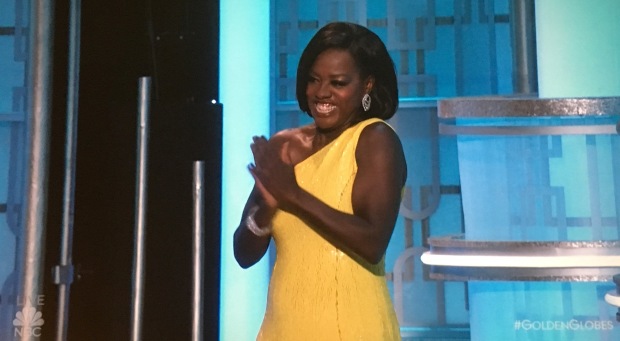 Now Chris Pine is here, and his facial hair is crawling up so close to his eyes that he’s reminding me very much of when the kid in Jumanji turns into a monkey.

That movie was scary, Chris Pine. Let’s reel it in.

Ben Affleck, Zoe Saldana and Sienna Miller get on stage for something, and I honestly don’t know what because I’m too distracted by Sienna Miller fighting her way to the front of the microphone. I will show you here in a play by play.

She gets up to the mic, but unfortunately Ben Affleck’s shoulder is in front of hers:

She then bumps into him in an attempt to make him MOVE: 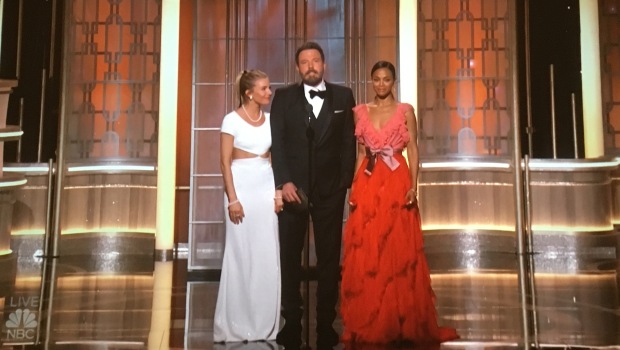 She wins, getting her shoulder in front of his.

Don’t think I don’t see that shit, Sienna! We all saw it!

Best director goes to Damien Chazelle for you guessed it, La La Land. Thank god I watched my screener of it today or I would be so fucking lost tonight! Good movie, guys. Gut wrenching.

Mandy Moore and Milo Ventimiglia are now on stage, and 1) I love you, Jess Mariano 2) What kind of body butter is Mandy Moore using?

That shit looks SMOOTH AS HELL! Donald Glover wins best actor in a TV comedy for Atlanta, and Emma Stone wins for best actress in a comedy movie for La La Land. La La Land ALSO wins for best comedy movie. It’s almost like LA is a narcissistic place that loves tootin’ its own horn!

Casey Affleck wins best actor for Manchester by the Sea, and homey looks more like Manchester LOST at Sea, amiright?! 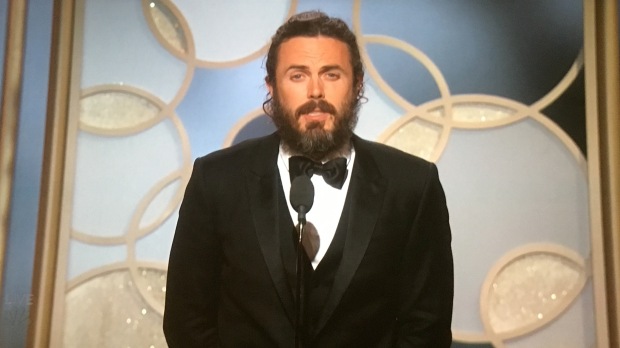 Pure zinger. Well done, Sam. Also if you haven’t seen Manchester by the Sea, it is also great but a REAL DOWNER. REALLLL DOWNER.

Best actress goes to Isabelle Huppert for Elle, which means nothing to me but she is adorable, so go her!

Moonlight wins for best drama film, and suddenly I realize that the show is finally over and I spent the last three hours just waiting for Ryan Gosling to keep popping up on screen in between all these other randos. Sigh.

Read my other recaps here.