So what was the theme of the night? Any guesses? No?

He’s gotten a little work done around the eyes, but I’m okay with it. Looks slightly puffy, like he did a few rounds of boxing before throwin’ on his suit but I get it, it’s Hollywood.

His opening monologue is about #OscarsSoWhite, which is predictable but appropriate.

Spotlight wins for best original screenplay, and I love how they type out the words from the script and put it on screen so everybody knows what the fuck a “screenplay” looks like. I like to compare the beautiful sentences and dialogue of these films with my own scripts, which tend to have things like, “We hope it’s a fart, but know it’s something more” in them. It’s fine, guys, I’ll grow into more serious dialogue (I won’t).

The Big Short wins for adapted screenplay, and Adam McKay is so fucking tall. He is a ginormous man. Look at him compared to all the other people.

Time to get UNCOMFORTABLE. Stacey Dash walks on stage and I immediately get a pit in my stomach because nothing that comes out of her mouth is EVER good. She tries to make a joke about Black History Month (girl doesn’t think there should be one: read here) and you can hear a god damn baggie of coke drop in that place. It is VERY AWKWARD.

So like, who runs the Oscars? There’s a person who gets to decide what happens during the ceremony, right? Because what is MORE awkward than whatever Stacey Dash just said, is that someone creating this show thought it would get a laugh. What a WEIRD THING TO THINK. Chrissy Teigen’s reaction pretty much sums it up:

Alicia Vikander wins for supporting actress for The Danish Girl and girl is like, really beautiful. She is also a TALENTED ACTOR and the feminist in me needs to point out her incredible work before delving into her body and hair and eyes and the fact that I am suddenly very, very aware that I can never be a famous actress because I am just not hot enough. It’s okay. It’s good to be honest with yourself sometimes.

The woman who wins for costume design for Mad Max is my spirit animal. She just like, strolled into the academy awards on her way home from CVS or some shit and I love it in her!! Fuck these people, amiright? 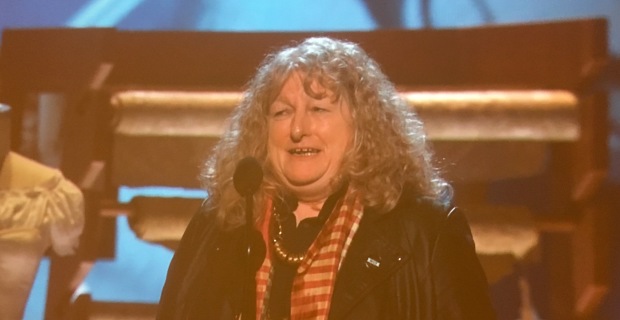 They play a clip for The Revenant, and afterwards they cut to a guy in a bear suit clapping and everyone I’m with starts cracking the fuck up. They love it.

A woman wins for editing Mad Max and this betch comes on stage and crushes it. She is like, a regular mom who picks her kids up from school and probably makes birdhouses on the side. And wins Academy Awards for editing badass movies, nbd.

There is a very uncomfortable clip about Black History Month, where in the end the joke is about celebrating Jack Black. Very original. All of this is feeling like cringe-y overkill at this point.

Now there is an announcement that The Minions are on their way to the theater and the Ghostbusters theme song plays us into commercial. Are these people on shrooms? Could you guys put any more random ass shit together?

Mad Max wins for sound editing and mixing (see the difference here), Ex Machina wins for visual effects, and now we’re onto the important thing which is a bit about Girl Scout Cookies.

Look I get it, award shows need comedic breaks. But if you’re spending so much fucking energy playing people off stage, maybe give them five more god damn seconds each and cut all this bullshit out of the show. BUT I DIGRESS.

We get to the animation shit and Inside Out wins for animated feature (duh). Now Kevin Hart gets on stage to speak his piece and I applaud every word he’s saying, but the 90s kid in me is just loving that he busted out a bedazzler to make his suit.

There is ANOTHER sketch about diversity and it’s just awkward that a room full of white people are laughing at it. Anyway here is the main visual you need to take from it:

Leo LOVES. IT. Hated the bear suit, but god dammit if he doesn’t get the giggles from this woman holding an Oscar. 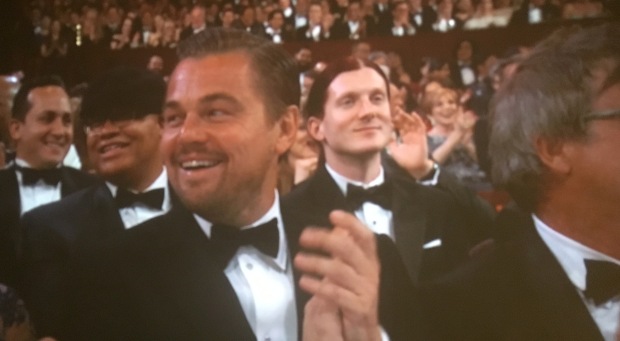 Louis CK presents for documentary short film and says, “These people will never get rich in their entire lives,” which I think is hilarious and perfect. Except A Girl In The River wins and this chick comes out and says that thanks to this film honor killings have been banned in Pakistan. Um, hi. This is the most important moment of the Oscars and we completely gloss over it because we are all huge pieces of shit. I’m sitting here eating fucking chocolate covered strawberries, swear to God, and she is making actual humongous changes in the world.

Amy wins for documentary, which is fine even though the style of this movie made me feel very weird. After they present live action short (I’m sorry I’m not giving this more attention than this sentence but these awards are TOO FUCKING LONG and I’m tired and full of strawberries), Lady Gaga performs and it is very intense, as everything in her entire life is. I like it. Hateful 8 wins for original score and the only words you can make out in this entire foreign speech is “Harvey Weinstein.” Sam Smith wins for original song. Yes, I’m working at lightning speed here. Patience is dwindling.

Alejandro G. Inarritu wins for director for the second year in a row and the producers reeaaaaallly try to play him off when his speech goes long. But you know what? Alejandro DOES NOT GIVE A FUCK. Cannot be played off, refuses, and they eventually give up on the music.

Brie Larson, angel of my heart, wins for best actress and Leo wins for actor and immediately goes into some shit about the environment. One issue at a time, bro! Tonight is not about greenhouse gases!

Spotlight wins for Best Picture and I want to be happy but honestly I am so fucking over this award show at this point. TOO LONG, guys. The “thank you” ticker did NOTHING for the length of this show and I’m honestly glad I don’t have to watch more of this for another year.

On a positive note, best dressed goes to this dude on the right for his ear/necklace combo.

Read more of my recaps here.