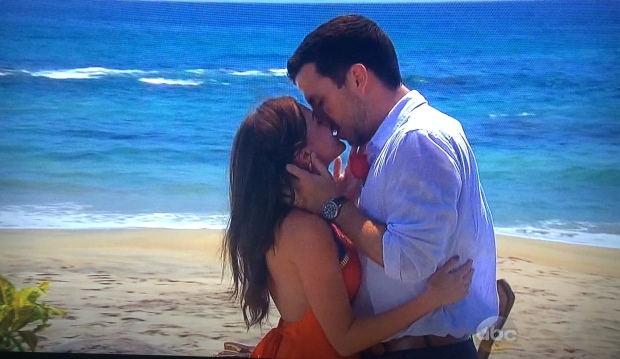 Those Bachelor producers should take a second job in gift wrapping, because boy can they tie shit up in a bow.

We are reminded of Carly’s heartbreak (via sad vignette), and Jade is still very upset about it. Like, she’s still crying. That’s how still upset she is. Meanwhile Nick is obsessed with Sam and every time he thinks about how hot she is he makes this face: 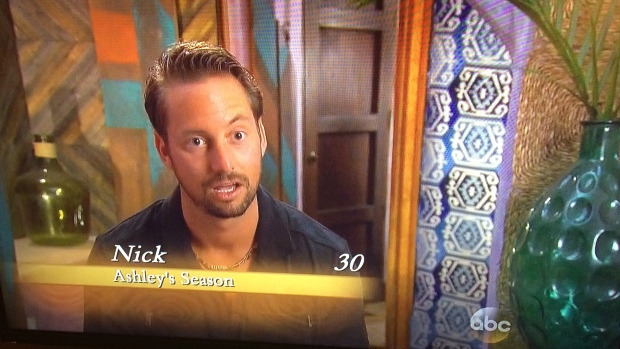 As we’re winding down to the final rose ceremony, Tenley needs to make some decisions. But not before consulting her journal. Oh, you thought her journal would have full sentences in it? Nope. Wrong. This journal is just floating WORDS and PHRASES. I’m going to be honest with you if I had a journal like that I’m pretty sure it would say, “Hungry” and “Email landlord about squeaky faucet.” 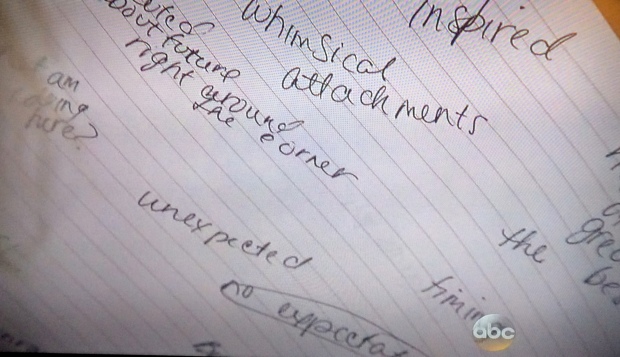 So they all start their final dates, and Nick is laying it on thick as molasses. This is his dream come true and he thinks that “all the men watching at home are jealous.” Maybe so, but they could never admit it because their girlfriends are sitting less than one foot away from them getting a shoulder massage.

These dates are boring as hell. That’s just how it is. Cassandra doesn’t want to do the fantasy suite because she’s a mom, Tenley is worried about the “lifestyle differences” between she and Joshua and how she only has ONE FREE WEEKEND the entire summer. Jesus Christ, Tenley. Manage your schedule.

Jade is shaken up by the Carly thing (IT’S GOING TO BE OKAY) so we think oh fuck, is something bad going to happen with her and Tanner? But Tanner tells her he loves her and it’s ADORABLE and she of course says it back. Awh shit, they gonna bone good tonight in that fantasy suite.

At the start of the rose ceremony Chris Harrison explains that “giving a rose today means you’re committed to each other outside of paradise.” Except is that true? Can’t you just accept it and then later be like eh, this isn’t working out? Apparently I’m wrong and this rose ceremony is CONTRACTUALLY BINDING.

Cassandra gets Justin’s rose, and then Nick goes to give Samantha his rose and says the MOST cringe worthy thing I’ve heard on the show (tough to do, Nick) which is, “I’m going to die of suffocation ‘cause you literally take my breath away.” UM, BARF. I’m sorry but if a guy ever said that to me I’d be like yeahhhhh I gotta go. I have a denti… matologist appointment. Yeahhhh.

But I guess joke’s on me because she accepts his rose and seems to be happy and I’m just really confused because I have not seen one ounce of spark between these two literally ever. He got her in the end though! Fuck you, Joe!!

Tenley declines Joshua’s rose because he lives in a town with one stoplight and she loves the vibrancy of a city. It’s actually a nice speech but all I can think about is how Tenley and Joshua have the exact same hair color. (Do I need an Adderall prescription? Another thing to write in my phrase journal.) 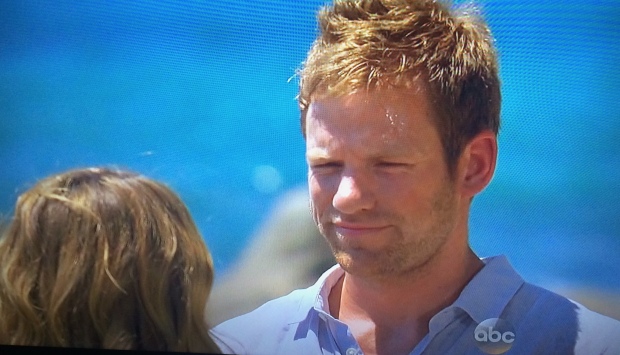 So then they say bye and get immediately into two different vans, and here is where I will pull back the curtain for you guys. There is a 100% chance they will see each other at the airport. How big do you think the Puerto Vallarta airport is? They’ll say goodbye, drive off in separate cars that are literally caravanning to the same terminal, and make small talk while waiting for their Carls Jr. combos (that airport doesn’t have a lot of good food options.)

Back in paradise it’s Jade and Tanner Time (what they should title their spinoff) and let’s all remember that I fucking CALLED IT on this proposal. Have you given me credit? GIVE IT TO ME. Okay so they’re standing there and it’s like hey Tanner, is that a ring box in your pocket or are you just happy to see her? 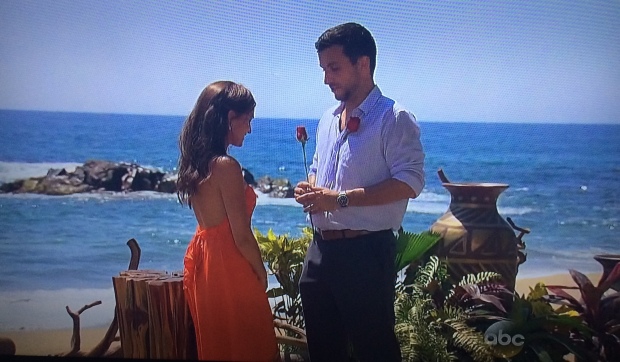 It’s of course a ring and she says yes and it is so fucking cute I want to kill myself. Cassandra, Justin, Sam and Nick are upstairs watching and Cassandra goes, “I’m so happy for them” and Sam goes, “Me too” and we all know they’re both like fuck this bitch right here.

In the end they show an absolutely perfect montage of Ashley I. crying followed by an absolutely perfect montage of Jade and Tanner falling in love. They also mention that the two of them will be getting married next year… in Mexico. Basically they will have a fake wedding on the following season of Bachelor in Paradise. Cute? Sad? All of the above.

Bonus recap: I never watch After Paradise because there are like twelve blond girls that keep trying to say witty shit to Chris Harrison and it’s annoying to me. But of course I watched this one (until I fell asleep) and learned that CASSANDRA is now dating JONATHAN, which is so Twilight Zone I can’t even.

Also Carly talks to Kirk and totally unravels any sympathy the world had for her. She is such an angry bitch about it and is trying to make some sort of feminist point while Kirk is just being genuine and apologetic. All I know is #1 BAD BITCH Ashley S. would’ve calmly told him that he wasn’t a real man and it would have been PERFECT.

Thanks for reading these recaps, they’ve been a real treat to write. I’ll leave you with this nugget of joy: Ashley S. is happy and in love. We can all sleep well tonight.

Check out more of my Bachelor recaps here.