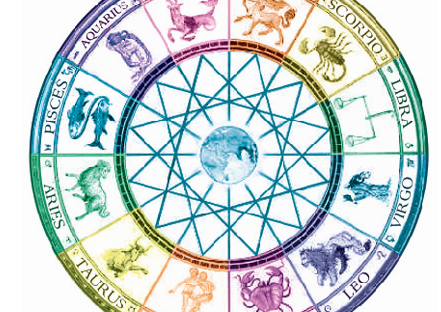 Aquarius
(January 20th-February 18th)
You’ve got a lot on your plate this week, Aquarius. Three Facebook friends are going to get engaged, and you will do squats in your living room while talking on the phone with your mom about how unhappy your cousin Megan must be now that she’s tied down. Remember to relax and remain optimistic about the future.

Pisces
(February 19th-March 20th)
Ruler Neptune will decide a lot of your fate this week, Pisces. Your coworker is going to imply that you must be on your period since you didn’t reply to his email with, “the usual girlie exclamation points.” Your instinct will be to slice his throat from ear to ear, but try to hold back. You know he has a small penis. Let that be enough.

Aries
(March 21st-April 19th)
With Mars as your ruler and fire as your element, things are going to be smooth sailing, Aries. You’ll get a bunch of Tinder matches, but you aren’t in a hurry to respond. This week will be better spent with your lady posse, drinking wine and discussing current events.

Taurus
(April 20th-May 20th)
Watch out, Taurus. You’ll order a green juice and the guy will call you sweetie as he hands it to you. Tell him you are a badass bitch and the next time he demeans a complete stranger he should remember that he is talking to the owner of a company and not one of his sweaty ass food truck peers.

Gemini
(May 21st-June 20th)
Your moon is over Venus this week, twin. Some guy’s gonna ask if you need help carrying that humongous Amazon Prime box full of stemless wine glasses to your third floor walk up. Don’t lose your cool. Say no thank you, carry that heavy ass box up three fucking flights of stairs, and put more money into your 2016 Roth IRA.

Cancer
(June 21st-July 22nd)
With Mercury rising (?), it’s time for a change, Cancer. You’re starting to realize that maybe your boyfriend is a fucking loser. Has he washed his sheets in the last three months? You will hit your breaking point and dump him. Your bestie will respond to the news with a, “You go girl!” gif.

Leo
(July 23rd-August 22nd)
You’ve got the travel bug this week, great lioness. You don’t need an excuse to book a trip or even a spa day, you’re a grown ass woman who earns her own paycheck. Spend the weekend in Palm Springs raging with older gay men. Go to a Korean spa and hang out with very naked Asian women while someone scrubs all your dead skin cells off. It’ll hurt, but in a good way. Treat yo self, girl!

Virgo
(August 23rd-September 22nd)
Don’t be over analytical, Virgo. An old lover from your past will reenter your life, possibly stirring up forgotten feelings. Remember that you are doing so much better at life than they are. I mean for god’s sake, he sells supplements. Be polite, say hello, and keep it moving. It may feel better than you think.

Libra
(September 23rd-October 22nd)
You’ll find balance in your apartment this week, Libra. Rearrange your space without any help from anyone. You don’t need a god damn man to move the couch. You like when your legs feel like noodles and you have two dead arms the next day. That means you did it all by yourself and now the chaise is on the south facing wall!

Scorpio
(October 23rd-November 21st)
Biting your tongue will be your challenge this week, Scorpio. A guy you’re casually dating will bring up the fact that his ex used to cook him chicken pot pies on rainy days. Although you’ll immediately think to say, “Well you can cook your own damn meals with me,” try just giving a long, overdramatic eye roll instead. He’ll get the picture.

Sagittarius
(November 22nd-December 21st)
With ruler Pluto, you’re going to find yourself feeling a little melancholy this week, Sag. You may be craving some male attention, and that’s okay. Flirting is not the same thing as needing someone to open this motherfucking jar of salsa that I’ve been trying to get open for the past three days. Like, is this what my life has come to? Bursting into tears alone in my kitchen eating shitty plain eggs with no chunky medium spice salsa? UGH like seriously, I knew I should’ve bought that little rubber square the last time I was at Bed Bath and Beyond but I was too focused on what I was going to use my 20% off coupon on. As if I have even used that stupid Vitamix a single time in the last three months. What a waste of money.

Capricorn
(December 22nd-January 19th)
Don’t expect the worst this week, you sexy mountain goat. A new job offer or promotion may be extended to you, and it’s a good time to take it. It will come with a significant raise, so be sure to enjoy it. As Rihanna once said, “Bitch better have my money.” Also your DVR’s on the fritz so make sure it records The Bachelor this week. And delete all those episodes of Lockup: Raw. It gives you nightmares.

One thought on “Weekly Horoscopes For Strong, Independent Women”