Hope you’re wearing deodorant, because this season of The Real Housewives of Atlanta is gonna be a HOT MESS. In the best way possible.

We kick off season 8 with a quick teaser of what the future holds and I will summarize by saying, “Shit is going down.” Buckle up, kiddos, next stop Crazytown (“On a railroad that is actually under the ground??” –Porsha).

Everyone’s tag lines are solid even though they are no Aviva Drescher, “They’re just pulling my leg.” Also none of their kids are in the opening, I assume because Riley’s dope ass was like oh HELL no, I can’t be associated with these people.

Porsha leaves baby-voiced messages for her 24-year-old boyfriend while she is on a “break from work.” It’s not like you work at Best Buy, girl. I don’t think you’re calling him during your ten minute smoke break. Meanwhile we find out that Dr. Jackie from Married to Medicine is the one who knocked up Kandi and Todd and it’s like SYNERGY!! Love it.

Phaedra explains that ever since Apollo got thrown in the clink, she and Porsha have become bosom buddies. She then says, “Got milk?” and here is how satisfied she is with that joke:

Cracks herself up. She updates us on Apollo by saying insanely proper and hilarious sentences like, “Apollo and I correspond quite frequently, we’re cordial.” She is an American Girl doll come to life and I fucking love her for it.

Peter gets back from Charlotte and is greeted by Cynthia’s salty ass drinking like she just watched an Instagram video of her husband cheating on her. Which is exactly what she did, so this is all adding up nicely.

They play a slow motion version of the video and I am like PRAISE ANDY because when that shit first came out I watched it and my stupid fucking brain was like wait what? Then I played it again and was still like wait what? Shit was going too fast. The slo-mo version makes my eyes get wide and I’m like OHHH SHIIIIIT!! Peter, you fuckin’ dog! Clear as day that man is doing something he is not supposed to be doing. No way around that. 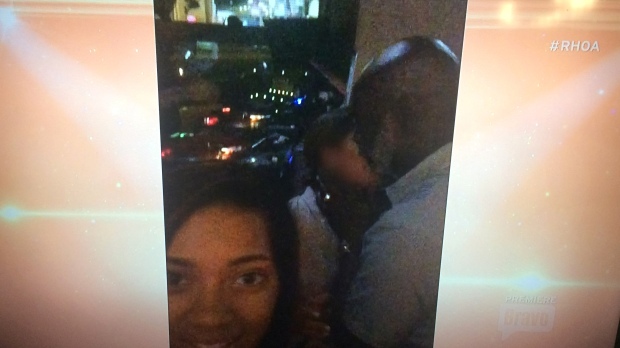 Except he DOES think there is a way around that (he has apparently not seen the slow motion version) so he goes in for the kiss and Cynthia is like NOPE. Rejected. She gets into it with him and after she says it looks like he was touching the neck slash tit of some ho he literally goes, “That’s what it looks like to you?” Umm, yeah Peter. That is what it looks like to her. She may wear too much eye makeup sometimes but not SO much that her eyelids are weighed the fuck down by it. She can see the shit that’s in front of her.

Meanwhile Porsha’s new boyfriend Duke comes to meet her at a hotel. I don’t care that he’s younger, you do you. But maybe don’t dress like you’re an actual middle schooler with a backpack.

Porsha agrees with me and is like, “Take the backpack off.” Suddenly I am positive Porsha and I are soul sisters and I’ll be honest that is both exciting and terrifying. She requests the best champagne the hotel has to offer, which is Cupcake. If that is the fanciest champs they have she is staying in the presidential suite of a Motel 6. That shit is $12 a bottle. You may have fooled Duke (and his backpack) but you are not fooling me.

Kenya shows Cynthia her new house and on the way there Kenya is already throwing so much fuckin shade at her neighbor Sheree “Who gon’ check me, boo?” Whitfield. Since I know Sheree is rejoining the cast this season I can’t help but let out a deep, full-belly cackle at the realization that Kenya is coming for her ass. Yes, yes. I am so fucking in.

In Cynthia’s latest business venture, she has been pooping eyewear. Her words, not mine. Also I know eyewear is the chic word but really she is selling sunglasses, okay? That’s like someone selling “cotton half sleeves.” Oh, you mean t-shirts? K.

We now learn that Todd’s been keeping Apollo’s shit for him while he’s in jail. Look, I’m a great friend. I’ll pick you up from the airport. I’ll feed your cats. But I am not keeping fucking dirt bikes in my garage for you for EIGHT YEARS. Like, no.

Cynthia is tryna launch her sunglasses ahem EYEWEAR, but is also asking her sister Malorie if she thinks Peter cheated on her in the Instagram video. This is the same Malorie that HID YOUR MARRIAGE CERTIFICATE on the day of your wedding so you couldn’t marry him, correct? I’m sure she’s going to say, “Cynthia, you’re crazy! Peter is an amazing man and he would never do that!” Wait- she doesn’t say that. She looks right at her and goes, “Yup.”

It’s time for Cynthia’s sunglass I MEAN EYEWEAR launch, and I’m not seeing any passed apps, only passed sunglasses on trays that look like they should have crab puffs on them. Not to be rude, but if you don’t have cocktail weenies I am out.

Peter walks in looking like Tommy Jamaica and immediately catches heat from Kenya. Do not mess with Kenya tonight. She is twirling her way into the shadiest corner of the room. 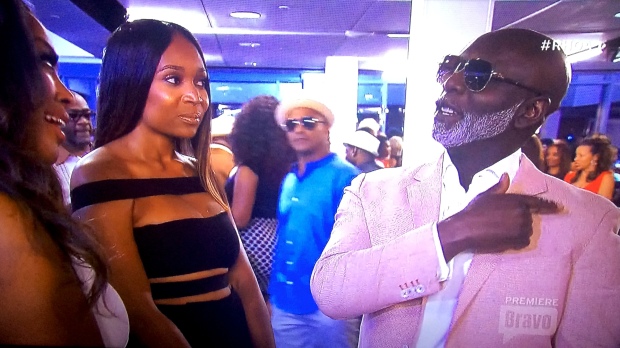 Malorie tells the entire group that Cynthia said she wasn’t attracted to Peter with his clothes off. God dammit, Malorie! That is your sister! She doesn’t want any of them knowing that until this shit AIRS, okay? This is their reaction to the information: 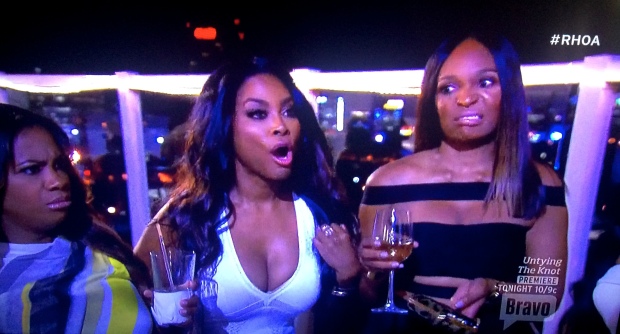 Annnnd now Sheree is here. The bitch is back, y’all!! At first she sort of flits around like she just drank forty Starbucks double shots. But the reality TV fucking goddess that Kenya is, is not gonna let that slide. She slams Sheree and her never-getting-finished house literally the second she sees her. She’s basically like, “Hi yes we met once a long time ago, I hear all your neighbors are fuckin pissed that you still haven’t finished that house you obviously can’t pay for.” That is an Anna Karenina-level READ if I have ever seen one.

Phaedra’s all, “Lord have mercy” while Cynthia’s all, “This is supposed to be about me!” It’s classic them. Now, Sheree’s voice may get high when she is upset, but that doesn’t make her the top dog here. Kenya is the one to beat this season, babe. I’m calling it right now. She is giving Sheree so much shade she isn’t gonna NEED any of that fancy ass eyewear they’re slangin’ tonight.

This is of course TO BE CONTINUED… because girls are only starting to be held back by other girls and earrings are still on. But if the rest of this season is literally just scenes of Kenya and Sheree and Sheree’s Ramona eyes, I’m going to blow through all my weed and need to up my night cream game so I don’t get horrible smile lines.

Check out more of my show recaps here. 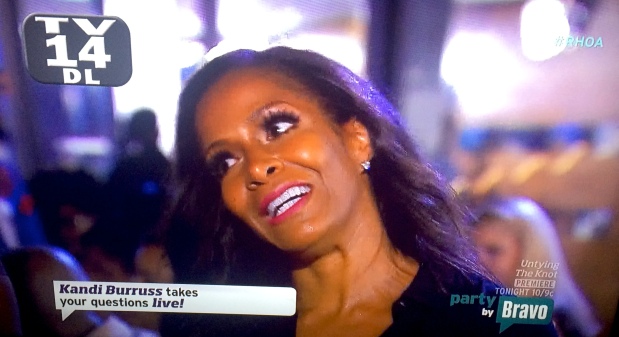